Inukjuak man to be sentenced Nov. 16 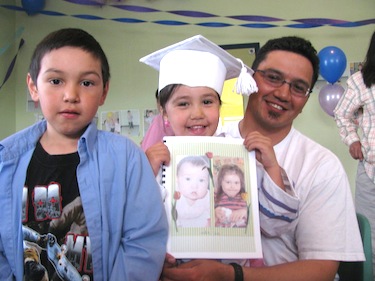 Here is Tommy Palliser of Inukjuak in happier days—shown with his son and daughter during the celebration of her child care centre graduation earlier this year. Palliser plead guilty to criminal negligence causing death on Aug. 30 in Inukjuak. (PHOTO HARVESTED FROM FACEBOOK)

Tommy Palliser, the Inukjuak man involved in a car-surfing incident on June 29, 2009 in Montreal that left another man dead, pleaded guilty Aug. 30 to a charge of criminal negligence causing death.

Palliser, who has been out on bail since his arrest and saw his court file transferred from Montreal to Inukjuak, could face life imprisonment, according to the maximum penalty set out under section 220(b) of the Criminal Code of Canada.

His guilty plea was not expected by Michel Verville, the Crown prosecutor, or revealed by Palliser’s lawyer, Gerald LaHaye. Both had spoken with Nunatsiaq News before Palliser pleaded guilty on Monday.

Biguë asked for a pre-sentencing report, usually requested when a serious criminal offence in involved, and often includes interviews with the accused’s family and friends to shed light on the circumstances surrounding the offence.

Based on the report’s contents and submissions from lawyers, Biguë will hand down Palliser’s sentence Nov. 16 in Inukjuak.

Palliser was driving a 2006 Jeep Commander through the Montreal suburb of Dollard-des-Ormeaux on June 29, 2009, when his passenger, his common-law spouse’s cousin, Kevin Ducharme, climbed through a sunroof onto the top of the vehicle.

Montreal police said Ducharme was standing there at about 3:30 a.m. when the SUV stopped at a red light on the corner of St. Jean Boulevard and Ernest St.

When the traffic light turned green, Palliser drove forward, and the movement knocked Ducharme off the vehicle and caused him to fall on his head.

The vehicle then left the scene. Witnesses in another car called 911.

Police identified Ducharme later that day only after his family called police to report that he never came home.

People typically car surf on an SUV or truck because of their greater height and flatter roofs.

Recent films like the Jackass series, Teen Wolf and Grindhouse have popularized car surfing, which caused injuries to 99 people in the United States from 1990 to 2008, according to a report on injuries resulting from car surfing by the U.S. Centre for Disease Control and Prevention.

More than half of the car surfers, predominantly young males, died, the report says.

With more cases of car surfing since the incident that led to Ducharme’s death, Quebec government now wants to crack down on the stunt, and lawmakers are studying a bill which could lead to more severe penalties for anyone who participates in car surfing.

Palliser, a well-known community leader in his hometown, is devastated by the chain of events.

Recalling the fateful night last summer, he says he was unaware that Ducharme had climbed up through the sunroof.

“I never dreamt this even in my worst nightmares,” said Palliser, his voice breaking over the phone during an Aug. 26 interview with Nunatsiaq News. “This has been very difficult.”

“I was just trying to take my friend home,” Palliser said. “I had no idea what (he) was doing….and I made a mistake. We all make mistakes. But that’s what I’m going to deal with for the rest of my life.”

In the meantime, Palliser said he is trying to be strong for his family.

But the father of two acknowledges that it’s been his family and friends that have helped him deal with his grief and regret since the accident.

Palliser said Ducharme’s family, based in Winnipeg, has been in regular contact to offer their support.

“They know I’m not the person the media’s trying to frame me as,” he said.

In addition to his job at the KRG, Palliser, who holds a degree in business from Concordia University, serves as a director and secretary-treasurer of the local land holding corporation and is a director and treasurer of Unaaq men’s group in Inukjuak.

But despite all the community work Palliser has helped with, the political aspirations he once had have been shelved – and that’s his choice.

“I don’t want to deal with anything else right now,” he said. “It’s too hard.”

The practice of car-surfing has never been an issue in his community, Palliser said.

“But I’ll do anything that’s asked of me to prevent this from happening again,” he said.

“I really hope these incidents stop,” Palliser added. “And I’m sorry we have to go through this.”