“I thought about it for a long time” — Romeo Saganash, who represents the Grand Council of Crees in Quebec City 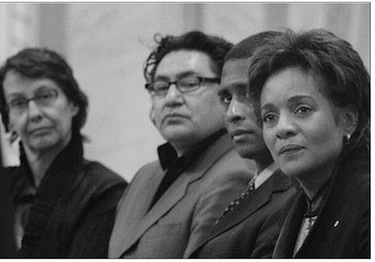 Roméo Saganash (with glasses) is seen at a forum on racial discrimination hosted by then governor-general Michaëlle Jean in Ottawa in 2008. Saganash, who will contest the Abitibi-Baie-James-Nunavik-Eeyou riding, is a “very important cadidate,” says the NDP’s Thomas Mulcair.
(PHOTO BY PAT MCGRATH/POSTMEDIA NEWS)

QUEBEC — The New Democratic Party has landed a big-name candidate to run in Quebec’s largest federal riding for the May 2 vote.

Romeo Saganash, who represents the Grand Council of Crees (Eeyou Istchee) in Quebec City, will seek the seat of Abitibi-James Bay-Nunavik-Eeyou.

A lawyer by training, Saganash, 49, has resigned as director of governmental relations and international affairs for the Grand Council of Crees.

He said he has been working for the Grand Council for 30 years and his interests and issues in the riding dovetail with his priorities as an NDP candidate: climate change, protection of water resources and the living conditions of indigenous people.

Saganash — one of the rare Cree leaders who speaks French and English — said one of his roles with the Grand Council has been to establish a better rapprochement with Quebec’s non-natives.

Saganash said the NDP’s slogan — Working Together — is in tune with his profile, working with natives and non-natives.

His Quebec City office was recently upgraded to the status of Embassy of the Cree Nation at a ceremony where Quebec Premier Jean Charest gave a speech praising good relations between the Cree and Quebec nations.

In the 2008 election, the Bloc Québécois’ Yvon Levesque won the seat with nearly 40 per cent of the vote. He is running again in this election.

The NDP, meanwhile, finished fourth, with 8.2 per cent of the vote.