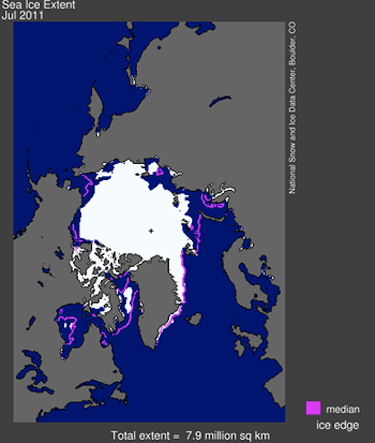 Arctic sea ice extent for July 2011 was 7.92 million square kilometres. The magenta line shows the 1979 to 2000 median extent for that month. The black cross indicates the geographic North Pole. (IMAGE/NSIDC)

Arctic ice cover reached the lowest level for July recorded by satellites from 1979 to 2011.

Average ice extent for this past July was 7.92 million square kilometres. That’s 210,000 km below the previous record low for the month, set in July 2007, reported the NSIDC’s Colorado-based scientists on Aug. 3.

Through July, sea ice declined at an average pace of 90,200 square km per day.

However, ice loss slowed “substantially” during the last two weeks of July as the weather changed, the NSIDC said.

Then, ice loss slowed as a high-pressure cell centered over the northern Beaufort Sea broke down, and a series of low-pressure systems moved over the central Arctic Ocean.

This change brought cooler conditions and likely pushed the ice apart into a thinner, but more extensive ice cover, the NSDIC said.

By July 31, Arctic sea ice extent was 6.79 million sq km. That’s slightly higher than the previous record low for the same day of the year, set in 2007.

Until recently, the central Arctic Ocean and Nunavut’s High Arctic islands served as refuges for some of the oldest, thickest ice, the NSIDC said.

However, the new data from the NSIDC shows that ice age is now declining in these areas, too.

Shipping routes in the Arctic also have less ice than usual for this time of year.

Over the past few weeks, the sea ice edge has retreated from the shores of Siberia and Eurasia, potentially opening up much of the Northern Sea Route, the shipping lane that runs along the Eurasian Arctic coast from Murmansk on the Barents Sea, along Siberia, and through the Bering Strait.

The tanker Perseverance set sail on June 29 from Murmansk, Russia, aided by two icebreakers, and completed the passage on July 14. The company plans to send six to seven more ships through the Northern Sea Route this summer.

The Northwest Passage is still choked with ice, said the NSIDC.

However, data from Environment Canada shows that ice loss in the Northwest Passage is well ahead of average.

“Whether a navigable channel does indeed open this year will depend on weather conditions through the next few weeks, but so far, it looks possible,” the NSIDC stated.