Cambridge Bay’s bridge gets a fix 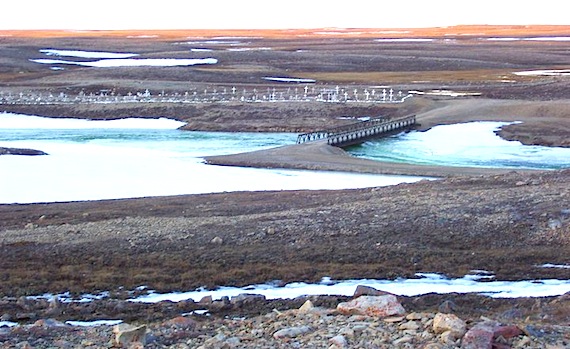 This bridge, shown here, which goes across the river on the way Ovayuk Territorial Park, has been closed for safety reasons since June 23. If engineers’ plan to fix the bridge goes as planned, the bridge could reopen this Friday. (PHOTO BY JOE OTOKIAK) 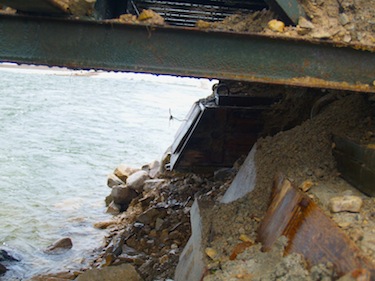 This photo shows erosion under the bridge, with the furthest support washed out from underneath. (PHOTO COURTESY OF THE HAMLET OF CAMBRIDGE BAY) 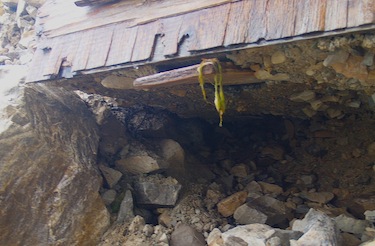 This photo shows the extent of the erosion from underneath. (PHOTO COURTESY OF THE HAMLET OF CAMBRIDGE BAY)

People in Cambridge Bay who want to drive out of town to Mount Pelly have been out of luck since June 23.

The water levels under the bridge were higher than anybody has ever seen, he said, and erosion occurred on the side of the bridge closest to town.

On June 29 Jivko Engineering, a Yellowknife-based company, planned to arrive in Cambridge Bay.

Engineers will inspect, and then fix the bridge, King said.

“We expect the bridge to reopen two days after work commences, if all goes as planned,” King said June 29.

The bridge will have to be lifted on one end and the ground underneath reinforced before being laid back in place, he said.

“Hopefully, we can have the bridge opened some time on Friday,” he said.

Some people in Cambridge Bay say they’ve never seen so much water flowing in the river as this year.

Not that the weather has been warm: snow and sleet fell this week in the Kitikmeot community.