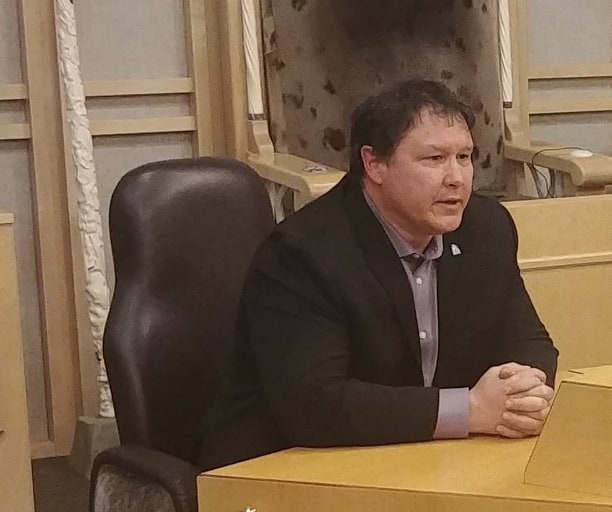 Nunavut’s finance minister, George Hickes, says the requirement that out-of-territory residents must self-isolate for 14 days before returning has kept COVID-19 out of the territory. (Photo by Meagan Deuling)

“And I feel the return on that is the progress that we’ve made in keeping COVID-19 out of Nunavut,” he said on Friday, May 8.

As of May 6, 314 people were self-isolating in southern hotels, and another 708 people had completed an isolation stay. The estimated total to pay for hotels, security, food, laundry, nursing and shuttles from hotels to airports was $3,982,673.

When the Government of Nunavut ordered on March 23 that travelling residents self-isolate in a hotel in either Edmonton, Winnipeg, Ottawa or Yellowknife before returning to the territory, Hickes said he didn’t know how many people were outside.

There is no end date in place for the mandatory 14-day isolation in southern hotels. Dr. Michael Patterson, Nunavut’s chief public health officer, acknowledges that the expense is significant. But he said that it would be more expensive if Nunavummiut in multiple communities were to get COVID-19.

“I’ve been told right from the beginning not to worry very much about money, but about protecting the health of Nunavummiut,” Patterson said.

As of a “couple of days ago,” there is no wait list to get into a hotel for isolation, Patterson said.

Despite the fact that most Nunavummiut have now returned to the territory or are hunkered down somewhere else, Hickes said that the GN will not consider changing the policy so that they can self-isolate in hotels locally upon their return.

“The hospitality industry in Nunavut is taking a hit, [so] you would think this would be an easy opportunity to assist the industry,” Hickes said.

The problem with that is people then have the potential to bring COVID-19 into Nunavut, or spread it on their way here.

Furthermore, Nunavut doesn’t have the capacity to attend to anybody who becomes seriously ill with COVID-19 while undergoing their 14 days of self-isolation—they’d have to be flown south for treatment, Hickes said.

Money from the feds

On April 14, the federal government announced that it would provide $30.8 million to Nunavut to help with the cost associated with COVID-19. At the time, Nunavut Premier Joe Savikataaq said this left the GN “short-changed.”

On Friday, Hickes confirmed that the GN doesn’t know when it will get that money, or what form it will come in.

At the same time as it announced the $30.8 million funding, the federal government announced it would provide $5 million to go towards airlines in Nunavut.

“The money is not in our account yet,” said Hickes, “but we’re treating it like cheques in the mail.”

In April, the GN was providing $2.25 million per week to Canadian North and Calm Air—the amount it predicts it would have been spending on duty and medical travel if it weren’t for the pandemic—just to keep them afloat.

Now, the GN said it’s in talks with the airlines to try and figure out how much money they will need to keep operating as an essential service.

Hickes said he’s treating the $5 million from the federal government to help support airlines as “a first phase of investment,” saying it’s not enough money.

For Nunavut to start to reopen, Patterson said that at least two of three things must happen: there can’t be any cases of COVID-19 in Nunavut; there have to be diagnostic capabilities to test for COVID-19 in Nunavut; and there has to be a reduction in the number of infections in southern jurisdictions.

Currently, there aren’t any cases of COVID-19, and there is now the capacity to diagnose COVID-19 tests in Iqaluit. Patterson said he also wants diagnostic testing to be available in Rankin Inlet before the second requirement is considered to be met.

There is a testing machine in Rankin Inlet, Patterson said—a GeneXpert, the same as in Iqaluit, and “they’re doing the work to get it validated now.”

In terms of evaluating the number of infections in southern jurisdictions, Patterson said they’re looking at counts of new cases, and that the increase is starting to slow down.

However, he said he doesn’t have a specific number in mind that he’s waiting for.

When two of the three requirements are met, Patterson said daycares will likely open first, “probably in reduced capacity.”

Service work, where it’s one-to-one contact, will also be considered, and groups larger than five will be allowed to gather outside.