A beleaguered Nunavut MP digs in, refuses to quit 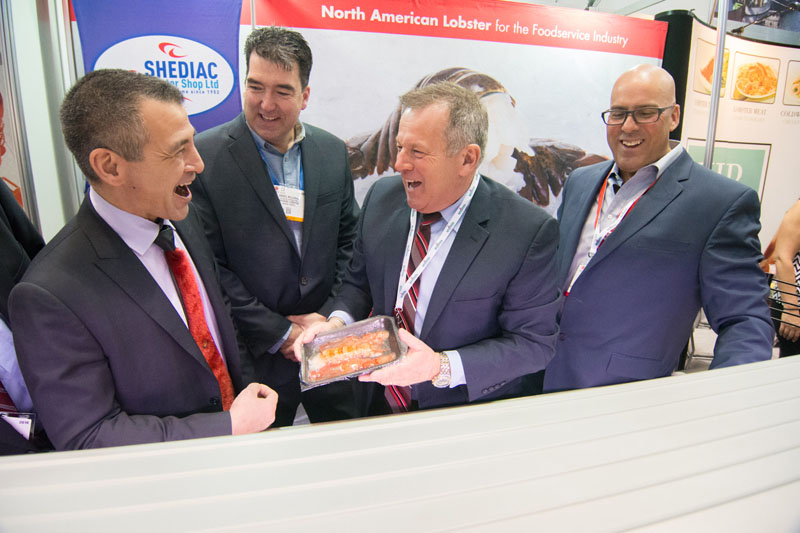 Nunavut MP Hunter Tootoo (right) in happier times, yucking it up with a group of fishing industry executives at a trade show he attended when he still served as minister of Fisheries and Oceans. After admitting to an “inappropriate” sexual relationship, Tootoo said he’s resolved to stay on as an independent MP. (PHOTO FROM DFO WEBSITE)

Nunavut’s beleaguered MP, Hunter Tootoo, refused to provide any more details Aug. 4 about the “consensual but inappropriate” relationship he admitted to in an Aug. 3 statement.

“I heard from my constituents that they wanted a better explanation and they deserve that…I’ve given that explanation,” Tootoo told Nunatsiaq News Aug. 4.

He also said he’s resolved to stay on as an independent member of the House of Commons.

“Being an independent member, I haven’t lost my resolve… to be Nunavut’s voice in Ottawa and raise issues and concerns that are important to them.”

Decent and honest Inuit male leaders know its a problem w/ too many of their male peers. They don’t like it but they don’t speak up.

When asked if Nunavut has a history and culture of male leaders behaving inappropriately towards females, Tootoo said, “I can’t speak to that.”

“I know many Nunavummiut and other Aboriginal people are dealing with issues of their past that led to addictions.”

And Tootoo did not respond directly when asked what he would say to constituents who think that by keeping his seat he is excusing male Inuit leaders who have inappropriate relationships with women.

“I recognize that it was an inappropriate relationship… that’s why I took the steps that I did.”

Other constituents on social media wondered how they could continue to trust or have faith in Tootoo.

@thomas_rohner how can you expect anyone to trust your judgment on anything anymore?

@thomas_rohner just because you can keep your job as MP, should you? Why?

Tootoo, who sought addictions treatment after he was ousted from Prime Minister Justin Trudeau’s cabinet and Liberal caucus in May, said he will not resign his seat.

Tootoo returned to work July 27 after two months of treatment at an alcohol addiction program.

After that, rumours about inappropriate sexual behaviour swirled until The Globe and Mail, a day after Tootoo returned to work, quoted sources who said Tootoo was involved with a female junior staffer.

Tootoo did not respond to those allegations until Aug. 3, when he read a prepared statement on CBC.

The MP did not take any questions at that time, nor did Tootoo answer most other questions asked by Nunatsiaq News on Aug. 4.

Instead, he repeated a few lines from prepared statements over and over again.

When asked in what way the relationship was inappropriate, for example, Tootoo repeated parts of his Aug. 3 statement.

“It was not a behaviour I believe to be appropriate and for that I’m extremely sorry and ashamed of that behaviour… I’ve been asked to protect the identity of the individual involved and that’s what I’m going to do.”

When asked what alcohol addiction has to do with the inappropriate relationship, Tootoo repeated what he read from a statement on July 27.

“I let my judgment be clouded and… I let alcohol take over my life. Alcohol is not an excuse for anyone’s clouded judgment. It was taking over my life,” Tootoo said Aug. 4.

When asked how long the inappropriate relationship lasted, Tootoo replied, again, “I’m going to protect the privacy of the individual [staffer].”

In a statement emailed to Nunatsiaq News, a spokesperson for Prime Minister Justin Trudeau said that on May 31 Tootoo acknowledged to the prime minister that he had been engaging in what was “an inappropriate relationship in the workplace.”

“He was therefore withdrawing from his ministerial responsibilities and from the Liberal caucus, and taking steps to address his addiction issues. In the same conversation, Mr. Tootoo informed the prime minister that he took full and sole responsibility for his inappropriate workplace conduct,” the PMO statement said.

“In order to respect and protect the privacy interests of all individuals involved, we will not be commenting further on this matter.”

Tootoo said he plans to spend the rest of the summer visiting Nunavut communities, “meeting his constituents and taking one step at a time.”

The top issue, Tootoo said, would be to gain new money for infrastructure investment, such as for telecommunications or housing.

Working as a Nunavut MLA for 14 years, Tootoo said he learned how to work with others through a consensus-style government.

“That’s what I’ll continue to do,” in Ottawa, Tootoo said, where he is “still in touch with some of my colleagues.”