A comforting haven for Iqaluit parents and tots

“This is a nice open spot where the kids can interact” 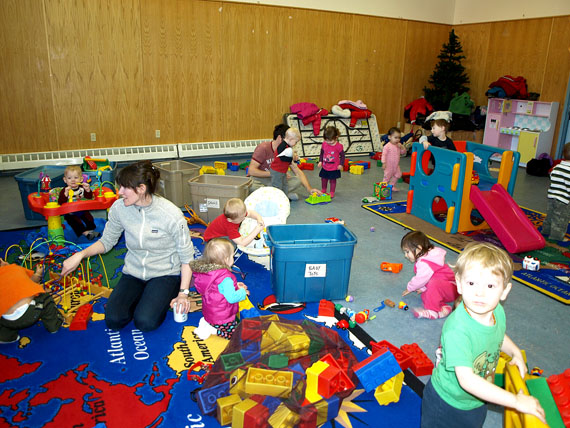 Iqaluit mom Sara Minogue is surrounded by children Jan. 27, at the Parents and Tots drop-in held three times a week at the Abe Okpik Community Centre in Apex. (PHOTO BY DEAN MORRISON)

Parents facing the struggle of raising young children are not alone in Iqaluit, thanks to a free drop-in get-together, which takes place three times a week in Apex.

The Parents and Tots program, active in Iqaluit for more than 20 years, was formally incorporated as a non-profit society in 2002 to support early childhood development and parents, develop parenting skills, and to support community and cultural wellness.

The group now operatesdrop-in sessions every Monday, Wednesday, and Friday from 10 a.m. to noon at the Abe Okpik Community Centre in Apex.

“The kids are allowed to engage in free play, have a healthy snack and there is also an organized craft activity for the older children,” said Sara Minogue, a volunteer parent.

Snack time is a very important function for the group, which serves a well-rounded snack of fruits, vegetables, bannock or pancakes.

The snacks not only feed hungry kids but also help families get ideas for healthy foods for their sometimes fussy toddlers, Minogue said.

The association operates on an annual budget of $34,000 a year.

Coordinators are the only members who receive any money for their work. The rest of the needs are met by volunteers.

Coordinators, responsible for opening and closing the playgroup, preparing a healthy snack, and dealing with whatever issues might arise, receive a $75 honorarium in the form of a Northmart gift card.

The association employs several mothers with young children throughout the year, and sees this as fulfilling part of their mandate of supporting Iqaluit families, Minogue said.

And while the drop-in is focused on creating a safe, fun environment for kids, it also functions as a social outlet for parents.

“In the fall, we plan to bring in guest speakers, like the public health nurse, who will give talks about breast feeding, weaning babies, or post-partum depression,” Minogue said.

“We offer a space where kids can run around and burn up energy, but just as importantly where the parent can come and take it easy.”

But just because your child isn’t mobile doesn’t mean the drop-in isn’t for you.

“We want to encourage people with new babies to come out, obviously their babies won’t be running around or interacting much, but we want them to feel welcome,” Minogue said.

Parent Brandon Coulombe has been bringing his young boys, aged three and two, to the drop-in for about three months.

Brandon and his wife are both nurses working opposite 12-hour shifts so that one of them can always be home with their children.

Both he and his wife have welcomed the chance to get out and meet other parents, while their kids get to play, Coulombe said.

“As a parent with young kids you get a little claustrophobic, so this is a nice open spot where we can come and the kids can interact and play,” Coulombe said. “And we have networked with other parents for baby-sitting as well.”

The parent and tot drop-in is one of only a few activities geared specifically towards this age-group in Iqaluit.

Other activities in the city include a parent and tot swim at the Astro Hill Complex pool on Tuesday and Thursday mornings and a story program at the public library on Wednesday mornings from 10:30 a.m. to 11:15 a.m..