Voyage of the Yong Sheng across top of Russia shorter, less dangerous than southern route 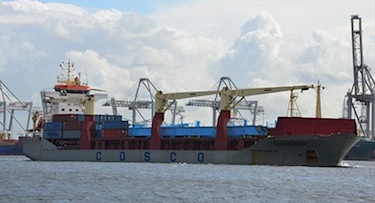 This photo from marinetraffic.com shows the Chinese cargo ship, the Yong Sheng, operated by Cosco Shipping, which has successfully transited the Northeast Sea Route.

A Chinese cargo ship has crossed the top of Arctic Russia via the Northeast Sea Route for the first time, reaching the port of Rotterdam in the Netherlands Sept. 10.

The Yong Sheng’s successful trip is a first for a commercial ship from China and is expected to open the door to more shipping between China and Europe along that route from July to November.

The trip on the Northeast Sea Route — also called the Northeast Passage — was about two weeks shorter than the current route, which is much longer, and requires ships to travel around India and through the Suez Canal to the Mediterranean and ports in Europe.

The Yong Sheng left Dalian in northeastern China on Aug. 8.

China has been looking for alternative sea routes to the dangerous Strait of Malacca sea route near Indonesia, which joins the Pacific Ocean to the east with the Indian Ocean to the west.

That passage is often subject to raids by pirates, prompting China to seek safer sea routes, the Times of India reports.

The Northeast Sea Route offers Chinese shippers a limited alternative at least for a few months a year, it said.