A greenhouse grows in Iqaluit 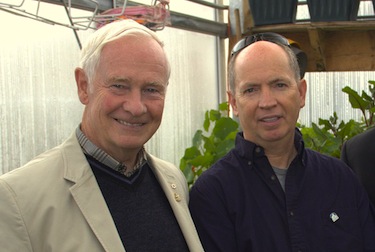 Governor General David Johnston, right, got a tour of of Iqaluit’s Piruqsiavut greenhouse Aug. 15 from Iqaluit Community Greenhouse Society member Michael Chappell, right. The society made Johnston an honorary member at the end of his visit. (PHOTO COURTESY OF MICHAEL CHAPPELL)

The Iqaluit Community Greenhouse Society has a new honorary member: Governor General David Johnson popped by the Piruqsiavut greenhouse Aug. 15 to see for himself how vegetables grow in the Arctic.

During his visit, Johnson munched on peas, herbs and edible flowers.

“He applauded our efforts at being self sufficient,” said greenhouse society member Michael Chappell. “He was very surprised by the variety of plants in the greenhouse.”

The country’s governor general isn’t the only person impressed by the community’s green thumbs — more and more of Iqaluit’s gardeners are looking for space at one of greenhouse’s 14 garden plots.

But the society that runs the greenhouse says they need more room to grow.

“We’d like to grow bigger,” said Darlene Thompson, the greenhouse society’s treasurer and gardener. “We’d have more people that would like to garden, but we just don’t have the space.”

The group’s 20-by-50 foot structure was constructed five years ago on Nunavut Research Institute property, with a Government of Nunavut grant.

The NRI partnership means the greenhouse is used for research projects, too, such as invasive species study being conducted this summer.

The group once aspired to fund-raise $4 million to build a sprawling, 11,000 foot greenhouse attached to a café, retail store and community centre.

Now Thompson said they’d settle for a basic second greenhouse, preferably near Iqaluit’s power station so they can use its excess power.

“We would definitely have the interest,” she said.

The City of Iqaluit supplies free water, but other costs – soil, garden supplies and insurance – are covered by the non-profit society.

Now the society is looking at its options for territorial grants or other sources of funding.

Thompson acknowledges that a commercial operation could not take root in Iqaluit without “a much larger space and a steady source of funding.”

The successful commercial greenhouse that operates in Inuvik, NWT had a decommissioned arena to move into and a much larger population to support it, she said.

“Unless you have a building donated, it’s just too costly,” she said.

But Thompson has her hands busy enough these days.

Although she weighs and keeps track of everything she harvests each year, she says it’s too complicated to know what she saves off her grocery bill in the summertime.

For Thompson, gardening is a pleasure as much as it is a way to grow food.

“It’s also a healthy community activity,” she said. “We wanted to foster a sense of community.”

Thompson said the greenhouse society would eventually like to work with community organizations and schools.

Memberships to the Iqaluit Community Greenhouse Society are $25 a year, plus $65 to rent a plot for the season. 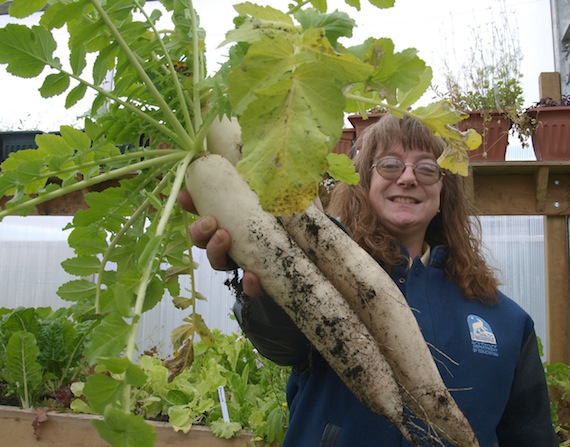 Darlene Thompson, a member of the Iqaluit Community Greenhouse Society, shows off her daikon harvest. The organization says they’d like to build a second greenhouse to accommodate the community’s interested gardeners. (PHOTO BY CHRIS WINDEYER)