How about Inuit Nunanganni University Kanatami? That’s “INUK” for short. 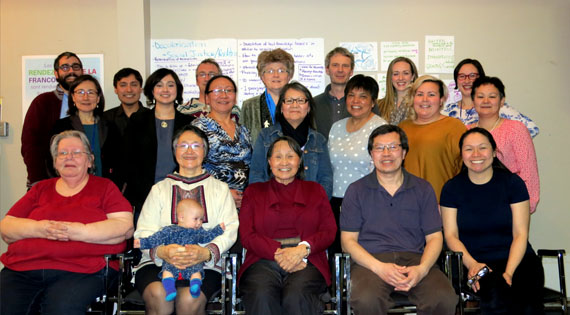 Participants at a workshop in Iqaluit held this past March to discuss a possible Nunavut-based university pose for a group photo. (PHOTO COURTESY OF SHEENA KENNEDY DALSEG)

It’s still a dream — but now an Arctic-based, Inuit-focused university no longer shimmers like a mirage on the edge of an unreachable horizon.

That’s because the powers-that-be now believe the dream could one day be made real.

This past June 2, through acting commissioner Nellie Kusugak’s throne speech, the Government of Nunavut announced the territorial government will start a feasibility study for a university to be located in Nunavut.

It’s too early to tell if the GN is serious or if the study will become a delaying tactic aimed at kicking the can further down the road.

But it’s a sign that GN officials have started listening to those who have pushed the idea for years, such as the members of Nunavut’s Ilitturvik University Society.

It’s also a sign that a $5 million donation the chair of Agnico Eagle Mines promised last year may have sent a jolt of new energy into the discussion.

This past March 18 and March 19, a group of people, mostly educators, academics and public office holders, sat down together at the Francophone Centre in Iqaluit to talk about creating a roadmap that could one day lead to a university for those who live north of the treeline.

That workshop was private. But the report they produced and released last month is public. Within it, the idea of a new Arctic university has become a little less vague and little more defined.

And though there’s still debate over how an Arctic university would work, there’s pretty broad agreement on how it should not work.

One: participants agree it should not become a pan-territorial university serving the three northern territories, an idea the three territorial premiers have floated in the past.

Two: it should not become a beefed-up version of Nunavut Arctic College, or a “University of Nunavut.”

Workshop participants agreed it should become a standalone institution, separate from Arctic College, with its own buildings, infrastructure and governance system.

And what it should become is a university for all the people of Canada’s four Inuit regions: an Inuit Nunangat university.

In that spirit, they even came up with a suggested name: Inuit Nunanganni University Kanatami, which forms an easy and convenient acronym: INUK.

Sheena Kennedy Dalseg of Carleton University, co-author of the report and a facilitator for the March workshop, said that was an easy conclusion to reach.

“For some of the stuff, it wasn’t even a question. It was just, yeah, that’s what we’re going to do. And that was one of them,” Kennedy Dalseg said.

“It made sense that we would start in Nunavut and then the Government of Nunavut would legislate the university and that people from all over Inuit Nunangat and anybody — it would be open and inclusive to anybody in the world to come — would be welcome,” she said.

She also said it was easy for participants to agree on where to put it: in Iqaluit, Canada’s largest and most developed Inuit community.

“Maybe down the road, campuses could open up in other regions of Inuit Nunangat, but right now, there’s some momentum building in Nunavut, so the idea is, let’s start there,” Kennedy Dalseg said.

Another big principle won widespread support: independence. An Inuit-focused university should be independent and self-governing, outside the control of government, Inuit organizations and the private sector, workshop participants said.

“Virtually every university in the Western world is based on the idea that it is independent, to promote academic freedom and academic excellence,” Kennedy Dalseg said.

That means new legislation, probably in the form a bill that would be passed by the Nunavut legislature, setting out an arms-length governance structure.

Another way to protect the university’s independence would be a mixed funding model so the institution is not dependent on a single organization.

That would mean a mix of financial contributions from governments, Inuit organizations and the private sector, Kennedy Dalseg said.

But an Inuit Nunangat university would likely give a prominent place to Inuit elders and Inuit knowledge holders, the workshop report said.

And it should also give pride of place to Inuit culture and the Inuit language and strive to become a “decolonizing force.”

To do that, some participants suggested that Inuit elders and knowledge holders be formally recognized and given a protected role, as they are at the Saami University College in Kautokeino, Norway, or at Nunavut’s Akitsiraq law school.

Another way, workshop participants suggested, is to ensure that Inuit language and culture lie within the core of the institution’s academic and research work.

As for what programs an Inuit Nunangat university should offer, participants came up with the following: Inuit studies, fine arts, linguistics, political science, education, health, natural science and law.

“There was also a lot of discussion about how the university could become an international centre for marine biology or cold weather engineering,” Kennedy Dalseg said.

And though the Inuit Nunangat university should start small, participants agreed the institution should one day get a dedicated building, with space for public and private archives, laboratories and other facilities.

“Participants agreed that a university campus could serve as an important hub and connection point for Inuit from around the world,” the report said.