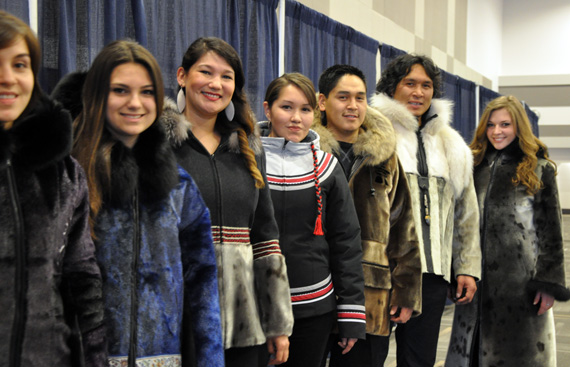 These sealskin creations were on display at the 2014 Northern Lights festival in Ottawa. A new survey shows that the majority of Europeans believe that if the WTO ban on seal products is upheld, it could have a negative impact on the trade of other animal or natural products. (FILE PHOTO)

A poll commissioned by the Trade Fairness Coalition suggests that a majority of Europeans are opposed to any World Trade Organization bans on commercial products based on “public morality” — unless there is clear evidence to support the ban.

An Abacus Data survey recently conducted in six European countries found that half of respondents oppose banning commercial products based on public morality, compared to only 33 per cent who support that approach.

The poll results come as the WTO considers an appeal against its recent decision to uphold the European Union’s ban on commercial seal products.

In response to a challenge to the EU ban filed by Canada and Norway in 2011, the WTO found last November that the ban is inconsistent with fair trade practices, but is justified because it’s intended to address “public moral concerns.”

More than half of the survey’s respondents — 57 per cent — believe that if the WTO decision is upheld it could have a negative impact on the trade of other animal or natural products.

“It’s clear that Europeans are concerned about public morality trumping scientific evidence,” said David Hutton, co-chair of the Trade Fairness Coalition in a May 15 release.

“It’s also clear they see the very dangerous precedent this could set for the fair trade in other sustainable use, natural resource and energy products.”

The survey also found a clear majority of Europeans (63 per cent) feel that seal hunting is acceptable in some form, while only 33 per cent oppose it completely.

Three-quarters of Europeans see the use of animals as acceptable as long as harvesting is done in a way that protects animal welfare and the sustainability of the resource.

“One of the main arguments for the EU seal ban isn’t supported by the facts,” said Aaju Peter, an advocate of the Inuit seal hunt and Trade Fairness Coalition spokesperson. “The WTO ban is based on the misconception, propagated by the animal rights industry, that Europeans are completely opposed to the seal hunt.

“It’s clear they are not and therefore the WTO should rescind the ban and allow for the trade of seal products such as oils, meats and pelts,” she said.

Seals are hunted for personal use, resource management and commercial products; in many northern communities in Canada and Greenland, Inuit rely on the hunt for food and income.

“The EU seal products ban has devastated our communities and resulted in real harm to the Inuit,” Peter said. “The only people profiting off the seal hunt these days are the animal rights industry whom make millions while we are left to suffer.”

In a February visit to Iqaluit, Marie-Anne Coninsx, the EU ambassador to Canada, told officials that there’s an exemption to the ban – if Canada wants it.

“The legislation of the European Union explicitly foresees the possibility of an exemption for the seal [ban], which is hunted in a traditional way,” Coninsx said.

When the European Parliament passed the seal product ban in May 2009, they created the exception for traditional hunters.

But groups like Inuit Tapiriit Kanatami and the Fur Institute of Canada maintain the exemption is meaningless, because the EU ban destroys the seal market for all producers.

The full report from the Trade Fairness Coalition is available here.

The Abacus Data survey contacted 2,407 residents aged 18 living in Italy, the Netherlands, the United Kingdom, Germany, France, and Spain. A total of 400 interviews were conducted online with a representative sample of residents in each country from April 11 to 22.