Aariak appeals for dialogue, “a fairer approach to trade” and respect in sealing debate 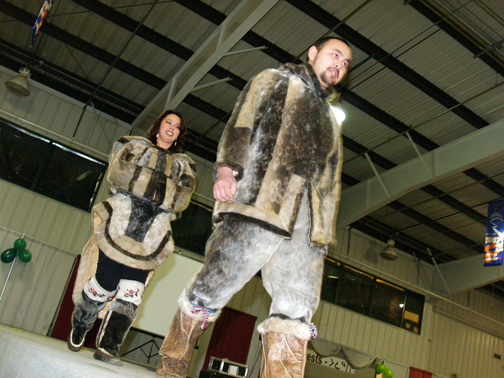 “Throughout the centuries, seals have fed us, clothed us and provided the oils that we burned to cook and heat our shelters,” says Nunavut Premier Eva Aariak in a Nov. 20 letter sent to the president of the European Parliament. (FILE PHOTO)

Nunavut Premier Eva Aariak has released the text of a letter she wrote Nov. 20 to Martin Schulz, president of the European Parliament, defending the Nunavut seal hunt as “sustainable and humane.”

“We in Nunavut reject seal bans — be they in the United States, Russia or the European Union — which we see as an attack on our way of life,” Aariak said.

Aariak condemned the European Union’s seal ban a “failure,” and compared the ban to ”blunt weapon” that has cut the price of sealskin products worldwide.

And Aariak disputed the opinion of European officials who continue to insist that Inuit are legally exempt from the ban on seal imports.

“In the real world fur auctions and international markets, there is no exemption to Inuit. Since the time seal bans were proposed by the European Parliament in 2008, the price of sealskins has collapsed by over 65 per cent,” she said.

Aariak also asked Schulz to consider the “sad consequences of the seal ban at home in the European Union where seals pose a threat to fish stocks.

“With the European market for seal products now in tatters, any seals that are killed to protect fish stocks and the livelihoods of your fishers will simply be wasted,” she said.

What Nunavut wants to see: a “new dialogue, a fairer approach to trade, and, most of all, respect between peoples of different cultures and traditions,” she said.

Officials from Government of Nunavut, Nunavut Tunngavik Inc. and Inuit Tapiriit Kanatami, along with other plaintiffs from Nunavut and Greenland, were in Luxembourg Nov. 20 to attend the hearing of an appeal against a September 2011 decision of the European General Court.

The court dismissed a bid by a group that includes Inuit to overturn the 2010 European Union prohibition on trade in seal products, which the European Parliament voted by a margin of 550 to 49 to impose in May 2009.

In the new regulation, the European Parliament created an exemption for seal products that result from “hunts traditionally conducted by Inuit and other indigenous communities and contribute to their subistence.”

That’s because the European court ruled the ITK legal appeal action inadmissible, in part because the EU seal product import ban does not “directly concern” the Inuit claimants or the organizations representing them.

The European court also found that most of the Inuit applicants do not actually attempt to sell seal products in Europe.