One in four homicide victims in 2014 were Aboriginal 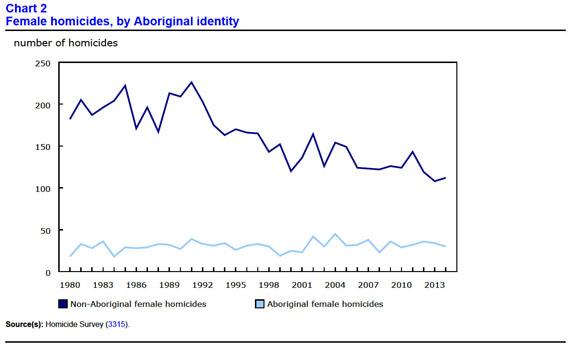 Aboriginal people, men and women alike, were far more likely to have been victims of homicide in 2014, Statistics Canada reported Nov. 25 in an annual release of Canadian homicide numbers.

This year, StatsCan includes Aboriginal-specific numbers in its regular annual homicide report for the first time.

And those numbers show that in 2014, Aboriginal peoples were disproportionately represented as victims and as accused persons in police-reported homicides that year.

That means the homicide victimization rate among Aboriginal people was six times higher than the rate for Canadians as a whole.

But Aboriginals only comprise about five per cent of the country’s population.

The highest homicide rates for Aboriginal victims in 2014 were recorded in Manitoba, Alberta and the three northern territories, while the lowest rates were recorded in Quebec and Nova Scotia.

And in 2014, Aboriginal females accounted for 21 per cent of all female homicide victims in Canada, up from 14 per cent in 1991.

Between 1980 and 2014, Aboriginal females account for 16 per cent of all females in Canada who died by homicide.

Other highlights of the report:

• one-third — or 32 per cent — of all persons accused of homicide in Canada in 2014 were Aboriginal;