AEM starts getting it right at Nunavut’s Meadowbank

“It was a strong performance on the production side” 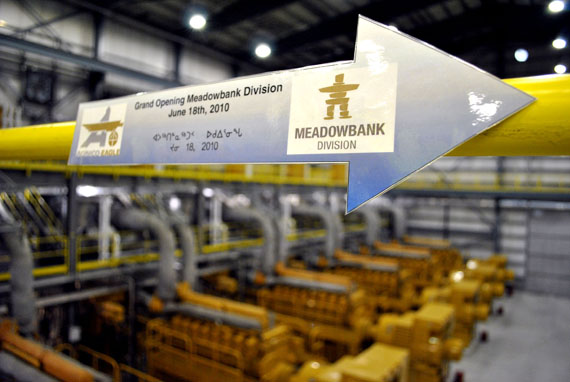 Agnico-Eagle Mines Ltd. achieved a big improvement in production at its Meadowbank mine near Baker Lake, the company reports in financial statements for the first quarter of 2012. (FILE PHOTO)

As it turns the page on a terrible year, Agnico-Eagle Mines Ltd. got better performance out of its Meadowbank mine near Baker Lake and most of its other mining projects during the first quarter of 2012, the company’s latest financial statements reveal.

“It was a strong performance on the production side [at Meadowbank], with a 40 per cent increase in throughput, averaging about 9,700 tonnes per day,” the company’s president and CEO Sean Boyd said during a teleconference April 27.

That means the company is now digging up more ore and extracting more ounces of gold from Meadowbank at a more efficient rate than last year.

This is due to “higher processing costs and overall cost pressures,” the company said.

But the company hopes to do much better in 2012 than in 2011, when the company wrote off nearly $700 million from Meadowbank’s book value.

That’s because, under a mining plan in place at the time, they calculated that Meadowbank’s revenues would fall far short of what the company had invested in it.

But AEM believes they’ve fixed that problem with a new mine plan that would see the operation close three years earlier than first projected, in 2017.

And AEM expects to increase annual cash flow at Meadowbank and improve the value of the asset in relation to its potential liabilities.

So far, that plan appears to be working.

As for AEM’s Meladine gold property, located about 27 km north of Rankin Inlet, the company will make a final production decision in 2013, after completion of a feasibility study.

Meanwhile, construction of an all-weather road from Rankin Inlet to the mine site began this past March 25 and the project proposal continues to move through the permitting system.

The company is expected to soon submit a draft environmental impact statement for Meliadine to the Nunavut Impact Review Board.

This past February, the NIRB approved a 153-page document setting out guidelines for that draft EIS.