After months of planning, Igloolik hunters get their bowhead 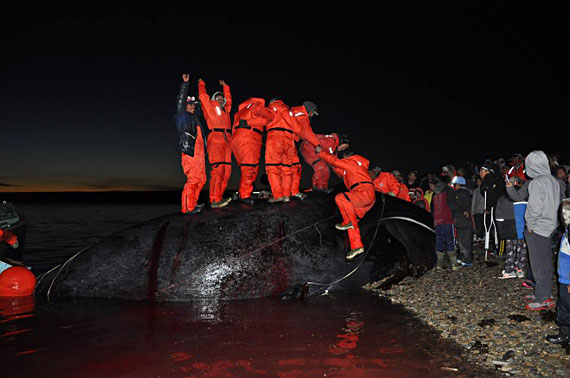 Triumphant Nunavut hunters stand on top of the 27-foot bowhead whale they caught Aug. 20 after months of planning and five days of hunting out on the sea. (PHOTO COURTESY OF GEORGE QULAUT) 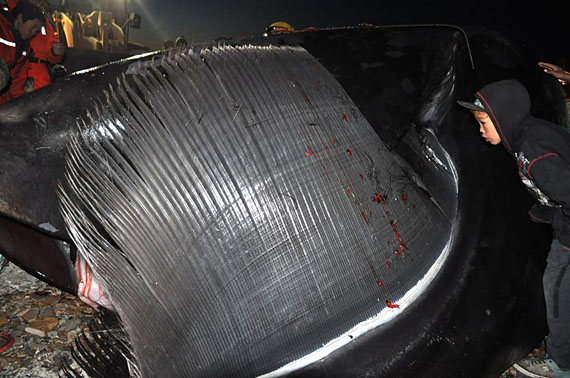 An Igloolik boy examines the baleen from the bowhead whale that hunters from Igloolik caught Aug. 20. (PHOTO COURTESY OF GEORGE QULAUT) 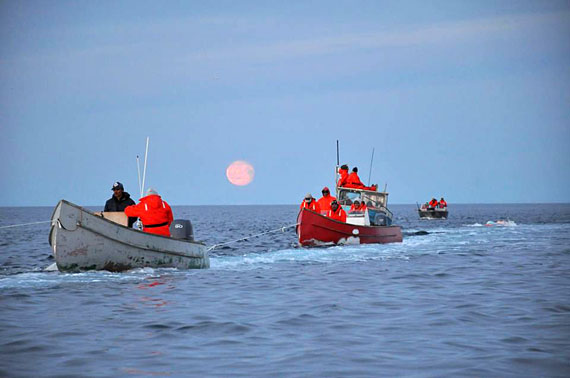 Part of the flotilla of six boats and about two dozen hunters that participated in Igloolik’s 2016 bowhead whale hunt. (PHOTO COURTESY OF GEORGE QULAUT)

Months of planning and five days of hunting on the sea came to a head Aug. 20, when about two dozen Igloolik hunters bore down on a 27-foot bowhead whale.

Juuta Sarpinak, 41, one of those hunters, said it was all over in 20 minutes as six boats, well-orchestrated by captain and elder David Irngaut, made quick work of the female whale.

When asked if at any time during the hunt Sarpinak felt fear, the hunter said there was simply no time for that.

“When you’re actually hunting the whale, you don’t think about that stuff. You just concentrate on harvesting the animal as quickly as possible.”

The whale was harvested around 7 p.m. and then towed for five hours to Igloolik’s beach, said Sarpinak, who took part in the hunt for the first time this year.

“It’s something I’ve watched before… and heard stories about it, but when you’re actually on the hunt it’s just an amazing experience, especially to see how well the hunters work together,” he said.

Igloolik is the first Nunavut community to capitalize on its 2016 bowhead whale tag.

But Coral Harbour has already called their hunt off, local sources said.

It’s the first time since 2002 that Igloolik has been awarded a bowhead whale tag.

The Department of Fisheries, Oceans and the Canadian Coast Guard agreed to increase the number of tags by two in the past five years, bringing the total to five.

News of the successful hunt traveled quickly to Aggu MLA Paul Quassa who, less than two hours after the kill and before the hunters returned to the beach, posted the message on Facebook:

“I want to congratulate the tireless bowhead hunters of Igloolik… hip hip hoorah!!”

“Thank you Igloolik hunters, delicious raw blubber I will enjoy,” one Igloolik resident posted at about 4:30 a.m. Aug. 21 on Facebook.

Amittuq MLA George Qulaut posted dozens of pictures of the hunt on Facebook, and wrote, “the maktuq was ever so nium!!”

Sarpinak said the hunt is important for the whole community.

“It really has big meaning to the community, it brings people closer together, builds a stronger community and traditional values. I feel privileged to feel part of that.”