“The people of the Arctic are the world’s Arctic experts” 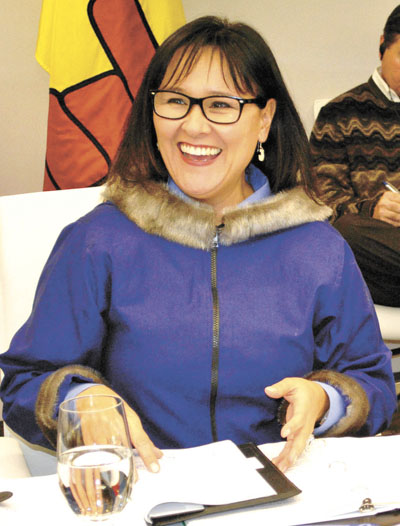 Nunavut MP Leona Aglukkaq, Canada’s ambassador to the Arctic Council, at a 2012 consultation meeting in Iqaluit. On Sept. 2, she opened the founding meeting of the Arctic Economic Council in Iqaluit with a speech. “By working side-by-side with the industry and businesses in the region, we are developing the North for northerners,” Aglukkaq said. (FILE PHOTO)

“By working side-by-side with the industry and businesses in the region, we are developing the North for northerners,” Aglukkaq said.

The Iqaluit meeting is closed to the public. Nunatsiaq News obtained a copy of her Sept. 2 speech.

But that concept has evolved into a body that will be self-governing, but linked to the Arctic Council in many ways.

Delegates from Canada, the United States, Russia, Finland, Denmark, Norway, Sweden and Iceland, along with representatives from various circumpolar businesses and Arctic indigenous peoples are expected to endorse that and other principles at this week’s meeting in Iqaluit.

Aglukkaq, who is hosting the Iqaluit gathering with Nunavut premier Peter Taptuna, said the AEC is unique for three reasons.

First, the new body sets up a business-to-business network that lets them share best practices and technology “for the benefit of northerners.”

Two, she said the economic council will act as a link between business and government.

“Through the AEC, businesses from across the Arctic will be able to inform the work of the Arctic Council, and vice versa,” she said.

Third, the AEC will include indigenous peoples in its decision-making, Aglukkaq said.

“By doing this we make northerners the decision makers which is completely appropriate as these decisions affect them directly,” saying also that “the people of the Arctic are the world’s Arctic experts.”

Delegates from the Inuit Circumpolar Council, the Arctic Athabaskan Council, the Saami Council, Gwich’in International and the Russian Association of Indigenous Peoples of the North are expected to attend this week’s Iqaluit meeting.

This, she said complements domestic efforts to achieve sustainable development.

In her speech, Aglukkaq took another swipe at Greenpeace, accusing them and other groups of exploiting Aboriginal peoples for their own purposes.

Although she didn’t mention Greenpeace by name, she ridiculed a commentary they published recently in Nunatsiaq News and other newspapers that apologizes for the damage inflicted by their campaigns against the seal hunt.

“An apology is nice but in this case it doesn’t cut it. No letter to the editor will ever undo the damage done through this campaign,” Aglukkaq said.

In explaining Canada’s overarching theme for the Arctic Council, “Development for the people of the North,” she said that means “the well-being and prosperity of northerners has to come first.”

And she said Canada demonstrated this by appointing her, and Aboriginal person from the North, to the federal cabinet following her election to the House of Commons in 2008.