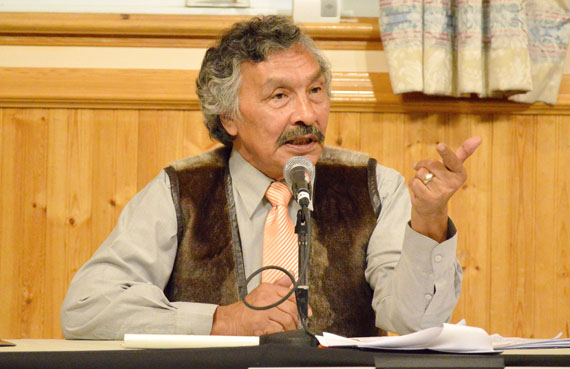 NDP candidate Jack Anawak mostly tried to stay out of the squabbles between Aglukkaq and Tootoo and instead tried to focus on the NDP’s platform. (PHOTO BY STEVE DUCHARME) 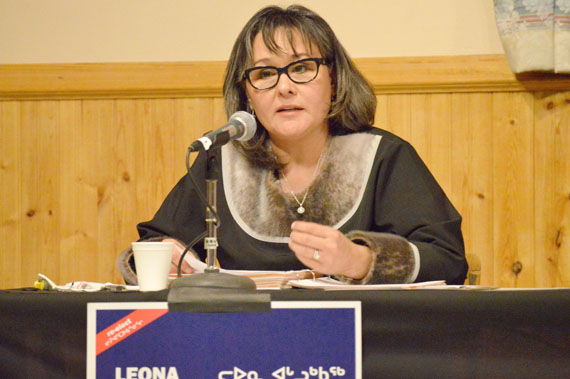 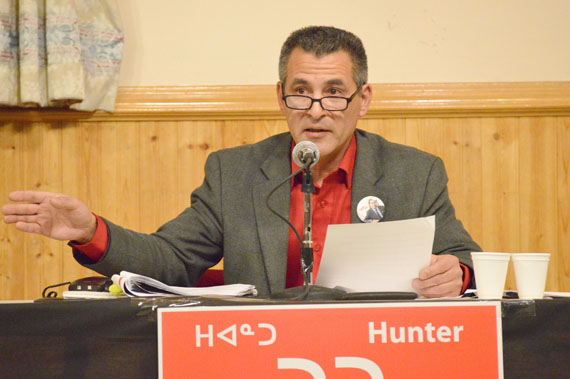 Leona Aglukkaq’s visit to Iqaluit’s Anglican Parish Hall Oct. 13 might have felt a little like an invitation to a firing squad.

The evening’s all-candidates debate — hosted by CBC North and broadcast over its radio network — saw the incumbent Conservative MP routinely attacked for not being available enough to the public, for the Conservative government’s support for the Mary River Phase II proposal from Baffinland Iron Mines Corp., and, of course, for the Nutrition North Canada program.

“Some of the communities I visited, they said ‘You’re the only one that’s come here,’” Tootoo said in a jab that accused Aglukkaq of not being available to voters.

“I said the Conservative candidate was here. They said, ‘Oh, I didn’t know,’” Tootoo said.

Tootoo arrived at the debate after an Oct. 10 campaign event in Iqaluit with Liberal leader Justin Trudeau, who re-confirmed the party’s $40 million Nutrition North revamp as well as an increase to the Northern Residents Deduction — indexed to inflation.

He largely ignored them during his times at the microphone, choosing instead to focus on his party’s platform.

Anawak reminded the audience of the NDP’s proposed additional funding for the North’s housing crisis and mental health programs, as well as a $32 million overhaul of Nutrition North, expanding the program to remote First Nations communities that are not on the eligibility list.

“We know that this program is broken,” Anawak said.

But Aglukkaq, while admitting the program is less than perfect, said her government is trying to improve it.

“Many of us question or doubt that the retailer was passing on the subsidy [to the customer]… we are trying to move forward to make sure the retailers are passing that subsidy on to us, which is why we’re making it mandatory for them to record that subsidy [on receipts].”

The Conservative government has pledged an $11-million increase to Nutrition North, which is currently operating on a $66 million budget.

Throughout the evening, Aglukkaq received little support from the Iqaluit-based audience, and suffered repeatedly from jeers and public stunts from members of the predominantly Liberal and NDP crowd.

Nunavut’s health and justice minister, Iqaluit-Sinaa MLA Paul Okalik, who ran for the Liberals against Aglukkaq in 2011, read a newspaper in the front row whenever Aglukkaq spoke.

Okalik was mimicking an incident last year when Aglukkaq read a newspaper in the House of Commons while opposition MPs were questioning Bernard Valcourt about food insecurity in Nunavut.

Despite all this, the candidates talked about many Indigenous-specific issues, due partly to questions from the audience.

“The Liberal Party is committed to completely implementing all the recommendations of the Truth and Reconciliation Commission,” Tootoo said in a response to an audience member’s question about the 94 recommendations in the TRC’s final report.

“We have to carefully review all those recommendations. They are broad and apply to not just the federal government, but also the territorial governments,” responded Aglukkaq.

“The NDP has made the commitment to implement all the recommendations, but we need to prioritize them in consultations with the people impacted,” Anawak said.

Tootoo and Anawak went on to say they would support a national inquiry into missing and murdered aboriginal women, while Aglukkaq supported enhanced funding for victims of domestic violence against women.

Perhaps the most heated exchange between Aglukkaq and Tootoo was reserved for the long-gun registry issue.

“I’m looking forward to hearing why one of my colleges had previously supported the long-gun registry and why the Liberals are proposing a new registry that will only make it harder for our hunters,” said Aglukkaq in her opening statement.

That’s likely a reference to Anawak, who was a Liberal MP when the Chrétien government introduced the now cancelled long-gun registry and other firearms restrictions in the 1990s.

“I understand there’s an ad on the radio, paid for by the Conservatives, saying that the Liberals are bringing back the long gun registry, I just want to let you know for the record that is completely false,” Tootoo said.

Aglukkaq continued to bring up the return of the long-gun registry throughout the evening, drawing audible objections from the audience and Tootoo while she was speaking.

“Page 54 says we will not introduce the long-gun registry,” he stressed, finally quoting directly from the Liberal platform booklet.

Spencer Rocchi, the Green Party candidate for the Nunavut riding, was invited by the CBC to attend the debate but was unavailable.