Nunavut premier says he did not attend 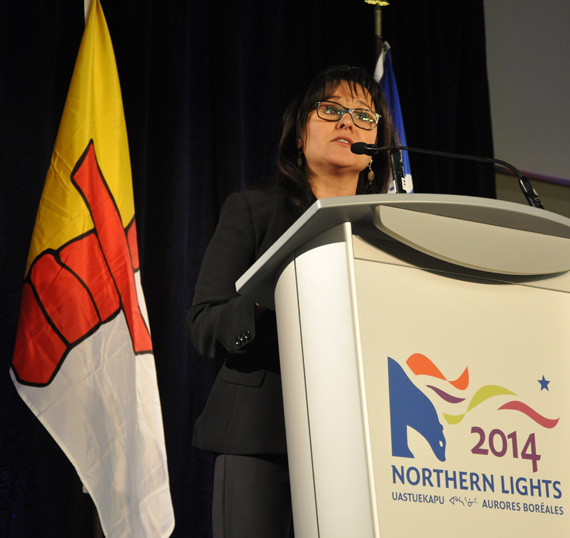 Leona Aglukkaq gave the opening keynote address for the 2014 edition of the Northern Lights business and cultural showcase Jan. 29, and event that draws people from all across Nunavut. (PHOTO BY SARAH ROGERS)

Nunavut MP Leona Aglukkaq, the minister responsible for the Canadian Northern Economic Development Agency, rose in the House of Commons Jan. 29 to deny that she breached ethics rules when she attended a Conservative fundraising event Jan. 28 at the tony Westin Hotel in downtown Ottawa, on the eve of the 2014 Northern Lights trade show.

A spokesperson for the Liberal ethics critic, Avalon MP Scott Andrews, told Nunatsiaq News that on Jan. 29, Andrews wrote to Mary Dawson, the parliamentary ethics commissioner, asking her to look into the matter.

The spokesperson said Andrews wants Dawson to determine if any guests who paid to enter the event are people who lobby Aglukkaq for funding.

The $100-per-ticket fundraising bash, advertised as “A Celebration for Our Champion,” was organized with help from the Ottawa West-Nepean Conservative association, MP John Baird’s riding, and was intended to raise money for Aglukkaq’s Nunavut Electoral District Association.

The Westin is the “official hotel” for the Northern Lights trade show, attended by hundreds of business and government participants from Nunavut, Nunavik and Labrador at the Ottawa Convention Centre next door.

A CTV news crew staked out the hotel’s front entrance but Aglukkaq tried to get into the hotel via an entrance leading from the Rideau Centre, in an apparent attempt to dodge reporters.

CTV ran the story in their national nightly newscast Jan. 28 including footage of Nunavut Premier Peter Taptuna entering the lobby of the hotel pulling a suitcase.

The story seemed to imply that the premier was planning to attend the fundraiser, but his press secretary Yasmina Pepa said Jan. 30 that was inaccurate.

Pepa said the premier was asked if he was attending the Aglukkaq event and he said yes, thinking the reporter was referring to Aglukkaq’s keynote speech at the Northern Lights conference on Wednesday. Pepa said Taptuna was not invited to the fundraiser and did not attend.

Nonetheless, the possibility that others who lobby Aglukkaq attended the fundraiser prompted Megan Leslie, the NDP environment critic, to rise during question period Jan. 29 to accuse Aglukkaq of unethical behaviour.

That’s because cabinet ministers are barred from receiving political donations from people or organizations who lobby the government for money.

The parliamentary ethics commissioner’s website advises MPs not to “solicit funds from a company or organization with which the public office holder, their office or their department has had official dealings or anticipates doing so.”

Dawson also advises MPs not to “solicit or accept funds from a person or organization who has lobbied or is likely to lobby the public office holders or their office, department or committee.”

“In addition, caution must be exercised when issuing invitations to political fundraisers stating that various ministers will be present. This would appear to imply an opportunity for lobbyists and other stakeholders to obtain special access to ministers by attending the event,” Dawson said on her website.

Aglukkaq’s agency, CanNor, distributes millions of dollars a year to northern businesses and governments, many of whom are represented at the Northern Lights trade show.

“The minister must have known that there was something not quite ethically right about this event when she snuck in via the back door… When is the prime minister finally going to put an end to this unethical behaviour and what sanctions will this minister face?” Leslie said.

Leslie referred to a recent uproar involving Aglukkaq’s cabinet colleague Shelley Glover, the heritage minister, who appeared at a fundraiser in Winnipeg attended by arts groups who get funding from her department.

Aglukkaq responded by saying that CTV’s news story is “inaccurate” and that she did not receive donations from anyone who lobbies the government.

“It was an event for a local riding. It was never advertised as anything more and was fully consistent with the guidelines that were in place. The local riding association has taken great care before and after the events to follow those guidelines and only appropriate donations were accepted,” Aglukkaq said.

Late on Tuesday, Aglukkaq’s director of communications Jennifer Kennedy told CTV news that anyone who benefitted from Aglukkaq’s department did not pay for tickets but came as free guests of the minister.

“Care has been taken not to solicit or accept funds from lobbyists or departmental stakeholders,” Kennedy told the broadcaster.

Meanwhile, organizers of the Northern Lights trade show are taking steps to distance themselves from the Conservative party fundraiser. A spokesperson told Nunatsiaq News Jan. 30 that the fundraising event was not part of the trade show program.