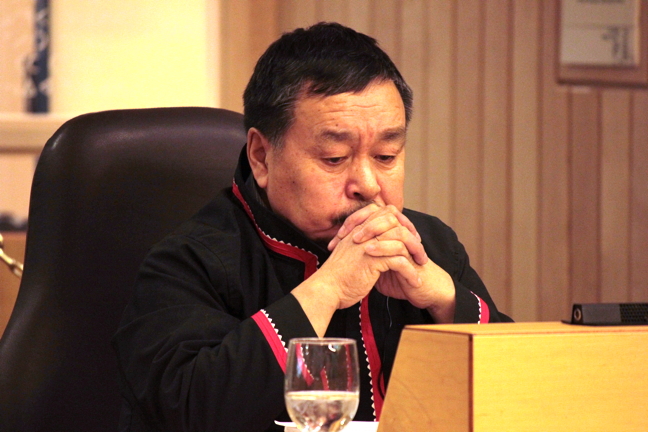 Uqqummiut MLA Pauloosie Keyootak, seen here during the recent winter sitting of the Nunavut legislature March 9, left Iqaluit for Pangnirtung on snowmobile with two others March 22. They have not been seen since. (PHOTO BY LISA GREGOIRE)

The search continues for three missing travellers, among them Uqqummiut MLA Pauloosie Keyootak, all of whom departed Iqaluit for Pangnirtung March 22 and haven’t yet arrived.

Emergency services have been looking for the overdue snowmobilers since Sunday.

The Emergency Measure office has upgraded to a 24-hour search schedule using air and ground resources from the Joint Rescue Coordination Centre in Halifax and Nunavut’s Department of Community and Government Services.

The JRCC also confirmed in a tweet that they’ve sent a Cormorant helicopter to help out, as well as a second Hercules, which is expected to relieve the first Hercules aircraft.

“The focus right now is the search itself and to make sure we cover as much ground as possible, and that it continues,” said CGS department’s media liaison, Kris Mullaly.

The GN department confirmed in a March 29 media release that a Hercules C-130 aircraft, equipped with flares and night vision, has been conducting nighttime searches between Iqaluit and Pangnirtung.

The news release also confirmed the missing travellers are not carrying a communication device with them.

A Twin Otter aircraft has been searching the trail during the days, and CGS expects the helicopter to arrive on site within the next few hours.

Ground teams on snowmobiles have departed Iqaluit and Pangnirtung and are currently searching the trail from both directions.

The emergency measures office confirms that the search crew from Pangnirtung camped overnight en route to Iqaluit March 28 and is continuing along the trail today.

In ideal conditions, it takes approximately 11 to 12 hours to complete the trail on snowmobile.

The distance from Iqaluit to Pangnirtung can vary slightly depending on conditions, but it is estimated at more than 300 kilometres in length.

High winds and snowdrifts have complicated travel on the trail in recent days, but rescuers are hopeful that the good weather March 29 will speed up the search.

At least 14 volunteers have been confirmed by CGS: eight spotters connected to the aircraft search and three volunteers from each community are traveling the trail on the ground.

“There’s a grid area around the trail that’s in the process of being covered right now,” Mullaly said.

“An air search has covered the trail completely. They will continue to cover it. We are continuing the search area from Iqaluit to Pangnirtung, which will be completely covered.”

Rescuers say they remain hopeful for a positive outcome.

“There’s no intention of closing down the search at this point,” Mullaly said.

Keyootak, 62, is a former president of the Qikiqtani Inuit Association and was elected as Uqqummiut’s new MLA in a by-election February 2015.

That by-election occurred after former Uqqummiut MLA Samuel Nuqingaq was kicked out of the legislature in a unanimous vote of sitting MLAs in October 2014.