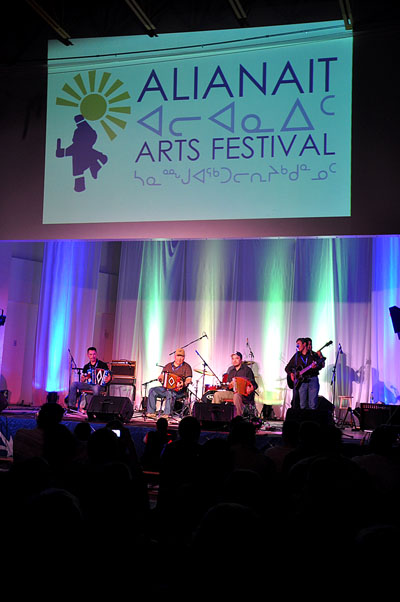 A scene from an Alianait show held in 2011. This year’s version of the festival starts June 28 with an evening concert at Nakasuk School. (FILE PHOTO)

Iqaluit’s Alianait Arts Festival will host world-class northern music this weekend, with performers from all three territories, Greenland and Labrador set to hit the stage June 28 to July 1.

The ticketed show will feature artists from the ends of the Canada and the Arctic, starting with Greenland folk legend Rasmus Lyberth, who sings in Greenlandic.

In from the Maritimes will be J.P. Cormier, and fiddler-guitarist Wesley Hardisty of B.C. will play his blend of rock, folk Celtic and Métis music.

One of Nunavut’s newest bands, Kelly Fraser and the Easy Four, will come up from Sanikiluaq in Hudson Bay to perform their brand of Inuktitut pop.

Four of the Arctic’s best female performers come together for this year’s feature show, The Circumpolar Soundscape, which hits the Nakasuk school stage on Sunday afternoon and evening.

The ensemble of Leela Gilday from Yellowknife, Diyet of Whitehorse, Nive Nielsen of Greenland and Sylvia Cloutier of Iqaluit continue a musical collaboration that started at the 2012 Arctic Winter Games.

They’ve since toured Greenland, performed in Ottawa, and bring their show to Nunavut for the first time.

The concert features B.C.’s Kinnie Starr, Toronto a capella group Eh440, Billy Kuksuk from Arviat, and Iqaluit’s own Koel and The Twin Otters.

Festival-goers will have a chance to see more of the performers in jam sessions, when different performers combine their creative powers, and workshops in which musicians offer to share their skills and musical experiences.

The sessions take place throughout the Alianait’s three full days, Saturday to Monday.

The workshops will be held at various locations, including the big top tent, the elders qammaq, and the visitors centre.

Performers of throat singing, break dancing, puppetry, Inuit games, poetry and spoken word will also share their skills. The workshops and jam sessions will be free for pass-holders, children and elders.

The festival’s highlight for youngsters will be the Kids Fest, Saturday morning in the Big Top Tent.

This features two puppet shows, starting with the home grown Takuginai puppets from the Inuit Broadcasting Corp. The second, Rabbit and Bear Paws by aboriginal puppeteers from Peterborough, Ont., follows the adventures of two brothers “in 1750s colonized North America.”

Kids Fest will also host Laakkuluk Williamson Bathory, who will perform story-telling, and family-focused musicians Molly McClure and Michael Doyle, former Iqaluit residents who will be back from Newfoundland.

The festival’s closing concert at Nakasuk school on Sunday night, Canada Day, will bring an eclectic combination of artists to the stage. Nive Nielson and the Deer Children, a Greenlandic Inuk indie band, will return to the stage. Tjupurru, an aboriginal of Western Australia, will play the “didjeribone,” a cross between the didjeridoo and trombone.

Halifax-based Gypsophilia will play their mix of “gyspy jazz, klezmer, funk, and classical,” according to the Alianait guide, and the Jerry Cans of Nunavut will play tunes more familiar to northern Canadian ears.

This year’s festival will be smoke-free, according to director Heather Daley, and vehicles will be kept clear of the grounds for added safety around the Bit Top Tent.

Alianait’s mission “is to build a healthier Nunavut through the arts,” she said. “We’ve started with that and this year we’re expanding on that.”

Festival programs are available at Arctic Ventures, the Centennial Library and the Nunatta museum. See the Alianait website at www.alianait.ca and the Alianait Arts Festival Facebook page for more information.