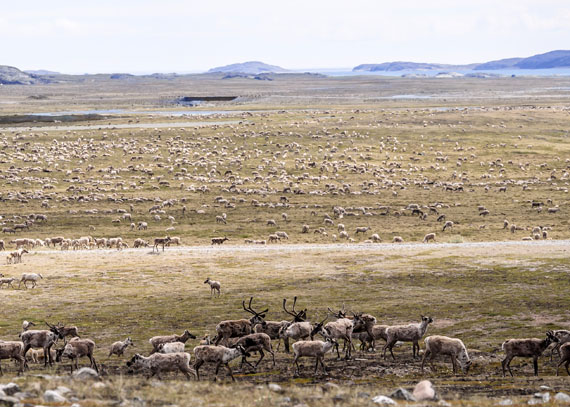 Caribou migrating through the Kivalliq region near Rankin Inlet. The Nunavut Planning Commission’s draft land use plan for Nunavut would ban mining and other industrial areas in about 80 per cent of Nunavut’s caribou calving and post-calving areas. But in calving and post-calving areas with high mineral potential, mining would be allowed subject to certain conditions, under the “Special Management Area” designation. (FILE PHOTO)

Following a protracted dispute, the Nunavut Planning Commission filed a lawsuit in Federal Court Aug. 18 against the Government of Canada, alleging broken promises and political interference on the part of federal government officials.

The legal action flows from Ottawa’s refusal to fund a $1.7 million public hearing required to complete the approval of the NPC’s final draft Nunavut land use plan.

“The residents of Nunavut and the people who wish to do business in Nunavut are casualties in this dispute,” the NPC said in a news release issued late in the day Aug. 18.

They also said the NPC is supposed to be an independent regulator at arms-length from government, but that Ottawa has used its funding power to compromise the commission’s “independent integrity.”

And the NPC said it plans to file more court actions later this month, related to proposals that “mysteriously disappeared as part of an ill-conceived negotiation strategy.”

The commission said that in May 2013, Ottawa imposed a two-year deadline on the NPC for completion of the land use plan.

But they now say the federal government “denies the deadline in spite of clear correspondence to the contrary.”

“Court documents and evidence to be led will show that this came about by way of political interference by federal ministers in the re-appointment of the NPC chair, at the time,” the commission said

And they say they will introduce court documents and other evidence to prove this point.

The NPC lawsuit is not unexpected.

In early July, in the midst of its dispute with Ottawa over the proposed Iqaluit public hearing, the NPC accused the federal government, and AAND minister Bernard Valcourt, of breaching its fiduciary duties by refusing to fund that hearing.

“The further silence of the government, on this subject, will be taken as a clear refusal to honour its fiduciary obligation,” said a July 2 letter signed by the NPC’s acting chair, Percy Kabloona.

Also on July 2, the NPC suggested they were willing to go to court to enforce what they believe to be the law.

“The NPC reserves the right to take any action necessary to compel the government to honour its obligation,” the July 2 letter said.

The commission released its long-awaited final draft land use plan for Nunavut this past June 20.

The plan, if approved, would set out legally binding rules stating which pieces of land in Nunavut may be used for what purpose, including lands that would be protected from development and lands where development would be allowed.

“The objective of the land use plan is to guide and direct resource use and development while providing for the existing and future well-being of the residents and communities that rely on the Nunavut Settlement Area and outer land fast ice zone,” the NPC said.

In it, mining and other industrial activities are banned from about 15 per cent of Nunavut’s land base, including critical caribou calving areas.

The draft plan, which covers about two million square kilometres of territory, takes in an area bigger than any land use plan anywhere else in the world.

“If Nunavut were its own country it would be the 14th largest in the world,” the NPC said in its Aug. 18 news release.

The commission began work on the plan in November 2007, with a budget of about $3 million a year.

After more than 60 meetings and numerous workshops, only a final public hearing is required before the Nunavut land use planning process can be completed, the NPC said.

But now, that might not happen until the commissions legal actions are resolved.

“Apparently, the citizens of Nunavut will wait until a court requires the funding of $1.7 million for the Nunavut Land Use Plan since the federal government refuses to fund or even go to the arbitration clause provided in the NLCA [Nunavut Land Claims Agreement], the commission said.