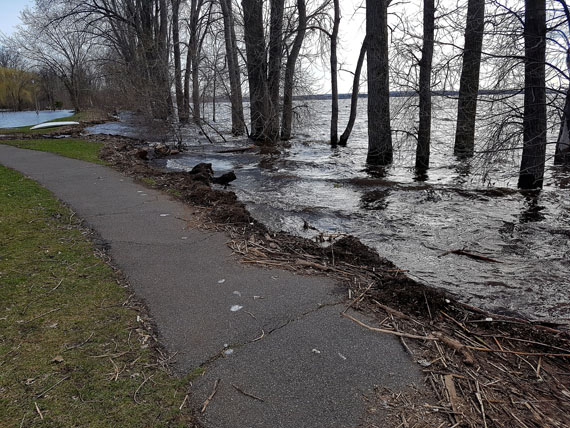 Extreme weather event: the first 21 days of April 2017, when 120.8 millimetres of rain fell, were Ottawa’s wettest on record, causing the Ottawa River to overflow its banks in many places, such as this spot off Britannia Bay. The Arctic Monitoring and Assessment Program predicts that continued warming of the Arctic will lead to more extreme weather events in lower latitudes, in places such as eastern North America and Asia. (PHOTO BY JIM BELL) 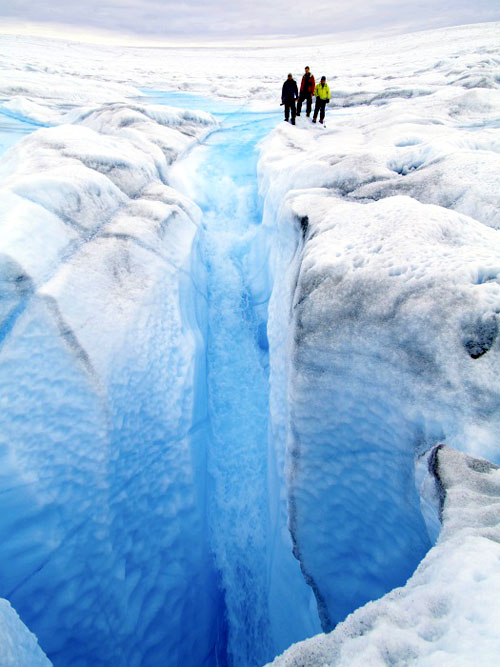 An assessment report with contributions from more than 90 scientists warned this week that, between now and the end of this century, continuing climate change in the Arctic could inflict tens of trillions of dollars of cumulative costs on the global economy.

“What happens in the Arctic does not stay in the Arctic,” Martin Forsius of Finland, chair of the Arctic Monitoring and Assessment Program, or AMAP, said April 25 at a news conference.

AMAP, a longstanding program of the eight-nation Arctic Council, released its latest reports on the impact of climate change this week at a conference in Reston, Virginia, near Washington, D.C.

The AMAP group’s main report, titled Snow, Water, Ice and Permafrost in the Arctic 2017 says warming in the Arctic is a major trigger for rising global sea levels and more extreme weather events like floods, avalanches and wildfires.

It’s a follow-up to an earlier report issued in 2011, when AMAP said climate change in the Arctic could damage the world’s food supply and flood its major cities.

Its most recent report, released April 25, says a recent economic analysis of the financial cost of climate change in the Arctic estimates a total cost—between 2010 and 2100—of between US $7 trillion and US $90 trillion, depending on the scenario.

“Studies have linked the loss of land and sea ice in the Arctic, along with changes in snow cover, to changes in Northern Hemisphere storm tracks, floods, and winter weather patterns—even finding evidence that Arctic changes influence the onset and rainfall amounts of Southeast Asian monsoons,” AMAP said.

In eastern North America, as far south as Florida, the jet stream has been shifting its path to curve southwards, creating lobes of cold air that bring unusually cold temperatures to those regions.

At the same time, warm lobes rush up on either side of those cold air fronts, creating unseasonably warm conditions in places like Alaska or Greenland.

Another costly consequence of Arctic warming is caused by the melting of land ice in the Arctic, which puts more fresh water into the oceans and increases the rate at which sea levels rise.

That flood of fresh water into the oceans could lead to changes in the pattern of winds and ocean currents that still require more study, the AMAP report said.

The melting permafrost also releases large amounts of methane, a greenhouse gas that is up to 25 times more efficient than carbon dioxide at trapping warm air inside the Earth’s atmosphere.

As for warming in the Arctic itself, the SWIPA report said that, although the Arctic remains a cold place, it has been warming faster than any other region on Earth.

“The Arctic was warmer from 2011 to 2015 than at any time in the period of the instrumental record…” AMAP said.

And by the late 2030s, AMAP scientists say that in the summer, the Arctic could be completely ice free.

“New observations from March 2017 show the lowest extent ever for this month since the start of the satellite record,” AMAP said.

And scientists are finding more extensive stretches of open water, in all months of the year, and the extent of seasonal ice is now greater than the extent of multi-year ice.

“Most sea ice in the Arctic is now seasonal ice that grows in the autumn and winter, but melts during the spring and summer. Before 2007 more ice was perennial, lasting more than one year.”

At the same time, the volume of fresh water in the upper level of the Arctic Ocean has increased by 8,000 cubic kilometres, or by more than 11 per cent.

“This volume equals the combined annual discharge of the Amazon and Ganges rivers, and could—if it escapes the confines of the Arctic Ocean—affect circulation in the Nordic Seas and the North Atlantic,” AMAP said.

By 2100, temperatures in the Arctic will likely increase by between 6 C and 12 C, AMAP scientists predict.

Even if the December 2015 Paris Agreement on climate change goal is fully implemented, and succeeds in limiting the increase in average global temperatures to 2 C, the effects of climate change will still continue in the Arctic.

“The effects of emissions reductions would therefore not become apparent until after mid-century,” AMAP said.

And because of powerful feedback mechanisms, global average warming of 2 C would translate into an average temperature increase of 4 C in the Arctic.

“The increase is projected to be even higher (around 6°C) during the winter months, and could reach 4°C as early as midcentury,” AMAP said.

In a separate report, AMAP predicts that the Baffin Bay-Davis Strait region will see a warmer, wetter climate between now and the end of this century.

Snow, Water, Ice and Permafrost in the Arctic by NunatsiaqNews on Scribd