Ancient bears that roamed Ellesmere Island had a sweet tooth

3.5 million years ago, early bears were already well adapted for the cold 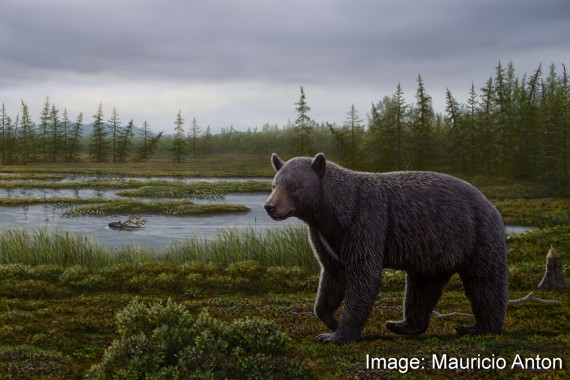 This illustration depicts the primitive bear that inhabited Ellesmere Island about 3.5 million years ago. (IMAGE COURTESY OF THE MUSEUM OF NATURE)

It turns out that the bad teeth of a bear that once padded around Ellesmere Island about 3.5 million years ago can tell us something about modern bruins.

Cavities in the teeth show that the bear had a sweet tooth. The now-extinct species, which resembled a small black bear, would have munched on crowberries, lingonberries, blueberries and raspberries that grew on the island at the time, in order to fatten up for winter hibernation.

Such cavities are actually unusual in wildlife, says Natalia Rybczynski, a researcher with the Canadian Museum of Nature, who co-authored a paper on the bear’s teeth that was published this week in the journal Scientific Reports.

Research conducted in the 1940s looked at the teeth of more than 3,000 carnivores, says Rybczynski. It found cavities in no teeth—other than those of berry-gobbling bears. “Definitely modern bears still have that problem, and you can trace that problem back all the way to this ancient one,” she says.

Ellesmere Island at the time was a much different place than today. While the world’s temperature was two to three degrees Celsius warmer than now, the Arctic’s average temperature was about 20 degrees warmer. This is due to the same polar amplification effect that’s made the Arctic warm up so quickly in recent decades.

Ellesmere back then had an annual mean temperature at around zero degrees. That’s comparable to Whitehorse today, although, at 78 degrees latitude, the island would still have seen 24 hours of darkness in winter and half a year of snow and ice. “You still would have had a very cold, harsh winter, and these bears would have had to survive that,” says Rybczynski.

Back then boreal forests approached the Arctic Ocean. Among the alder, birch and larch trees roamed many strange creatures, including a giant camel, a three-toed horse, a small deer and frogs.

The presence of the last animal, especially, tells you “it’s not the modern Arctic,” says Rybczynski.

Ellesmere Island was also inhabited by a now-extinct sort of beaver, smaller in size than the beavers we’re familiar with today, but relatives of a gigantic variety of the animal that existed in the Yukon before the last ice age. Thanks to Ellesmere Island’s beavers, a pond built by them ended up preserving the bones of many now-extinct creatures, including the bear.

These bones were retrieved over a 20-year period by Museum of Nature researchers. These excavations were first led by Richard Harington, a now-retired distinguished researcher with the museum. Rybczynski first worked with Harington at the site as an undergraduate student and later went on to lead excavations herself.

Modern bears have developed teeth that are better suited to munching on plants, with more prominent molars than the now-extinct primitive bears of Ellesmere Island. These primitive bears, identified by scientists as Protarctos abstrusus, also had flatter foreheads and higher crests on the top of their skulls.

Researchers actually have the remains of at least two of these primitive bears from the site: the skull of one young bear and the jaws of an older animal, along with an assortment of other bear bones.

Today’s modern bears are believed to have originated from the mid-latitudes of Eurasia. “They’re from China. They’re from Romania,” says Rybczynski.

“So it’s actually surprising to find this bear so far north, 78 degrees north.”

The only other remains of Protarctos abstrusus that’s been discovered is a single tooth found in Idaho, “so people didn’t have much to say about this bear, but we have a whole bunch of it now,” says Rybczynski. “Now that we have so much of it, we can say much more.”