And then there were eight: no council by-election for Nunavut capital 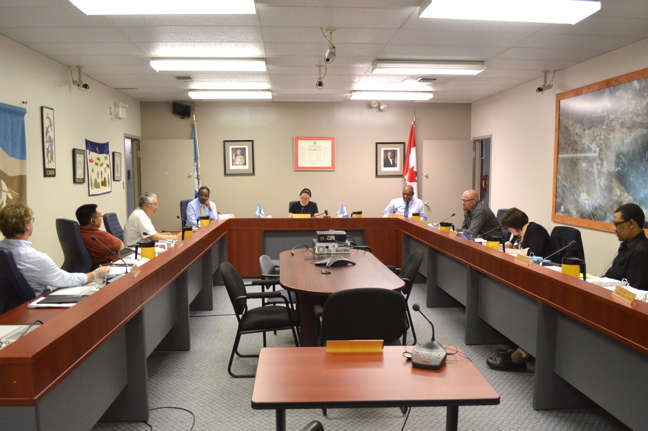 In a 3-2 vote, Iqaluit councillors have decided to forgo both appointments and by-elections and leave a vacant seat empty until the next election in 2018. (PHOTO BY STEVE DUCHARME)

Iqaluit City Council will press on with one fewer councillor this term.

That’s after having decided, in a narrow vote June 29, not to fill the seat vacated by former-councillor Gideonie Joamie.

Joamie tendered his resignation to the city in an internal email May 4, calling the debate at the time over the mayor’s proposed vacation travel assistance benefits “a sideshow.”

Deputy Mayor Romeyn Stevenson made a motion for council to continue without filling the vacancy after nearly an hour of back-and-forth debate among councilors.

That means Iqaluit’s city council will for now number seven councillors, plus the mayor.

When asked why he abstained, Akumalik said he wanted more time for council to decide the best course of action.

Matshazi, who was in favor of holding a by-election, said he did not want to be forced into choosing between no election or an appointment — the two options discussed most in council.

“I wish we could go for an election to choose someone, you should not put us in the light of having to choose individuals,” Matshazi said on his abstention.

Chief Financial Officer John Mabberi-Mudonyi told council that a by-election would cost the city about $90,000.

“We’re missing an opportunity to have a full council and we’re stuck deciding to go with the status quo, it just does not make any sense to me,” Coun. Terry Dobbin said of Stevenson’s successful motion.

Dobbin suggested the city could save money by piggybacking its by-election on the ballot for the Iqaluit District Education Authority’s next election, scheduled for later this year.

The decision by council to leave Joamie’s seat empty came after two failed attempts by Dobbin and Coun. Jason Rochon to appoint an individual to the position.

“He’s a knowledgeable candidate, he’s familiar with all of the issues and if he’s interested I’ll move to appoint councilor Bell,” he said.

But that motion drew criticism from several councillors who had served with Bell in the past.

“I don’t want to carry on this conversation about past-councillor Bell. He chose not to run [in the last election], so I can’t support or second Dobbin’s motion,” Akumalik said.

“I would find the irony rich for somebody who spent a fair amount of time in this chamber belittling our appointed councillors for being appointed, that we would then appoint Coun. Bell. I don’t think that would be appropriate,” Stevenson said, referencing an exchange between Bell and former councillor Stephen Mansell last year.

“I’m comfortable with seven people in this council and waiting until the next election. If there was another resignation or another seat then that would be too much [and] I would feel differently.”

Rochon put forward a failed motion to consider other former councillors including Bell, Stephen Mansell or Lynda Gunn for nomination, which was amended later to ensure that eligible individuals are interested and then re-amended to support an open nomination of any eligible person.

But Mansell later emailed to say he wouldn’t have accepted an appointment anyway, and Bell posted the same on Twitter.

Gunn was the only candidate in the most recent municipal election who did not win a seat on council, losing narrowly to Coun. Simon Nattaq by only 18 votes.

Dobbin defended Bell’s record after criticism from Akumalik and Stevenson.

“If there was a by-election, councillor Bell would probably win hands-down in my opinion,” he said.

Dobbin told council that Bell was “instrumental” in replacing the city’s former CAO, John Hussey, in 2014.

“Previous council members were willing to renew the former CAO’s contract without even a performance review. Councillor Bell and myself were instrumental in taking this city out of the financial crisis that it was in,” he said.

“Regardless of his tactics, diplomacy… he fought hard for the city,” Dobbin said. “He did a stellar job.”

Several councillors were reluctant to invest in an expensive by-election, given the city’s financial instability.

“I don’t think its financially smart. We need to be frugal. I think we need to wait,” Coun. Megan Pizzo-Lyall said.

“I believe in democracy, people have the right to vote. We didn’t have much of a turnout at the last election, it’s not worth it to me.”

The next municipal election will be in 2018.