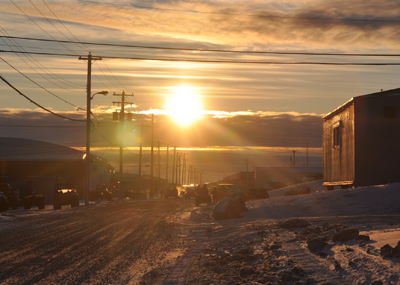 Arviat residents want stricter wildlife management to prevent a growing number of polar bear–human encounters along the western Hudson Bay coast—this after a young man was mauled to death on July 3. (FILE PHOTO)

A Nunavut community wants stricter wildlife management to prevent a growing number of polar bear–human encounters along the western Hudson Bay coast, after a young man was mauled to death on July 3.

But first, residents of Arviat said they need time to grieve and support the bereaved family.

Aaron Gibbons, 31, was visiting nearby Sentry Island on July 3 with his three young children last Tuesday when a polar bear approached the group.

Gibbons shouted for his daughters to go to the family’s boat to radio for help from the community, about 10 kilometres away.

Residents say his daughter’s anguished pleas for help were heard in many homes in the community of 2,700.

Relatives say Gibbons got between the bear and his children in order to protect them. He had carried a .22 rifle with him on the outing, but he was unarmed at the time the bear attacked him.

Another Arviat resident shot and killed the bear shortly after the attack on Gibbons; no one else was physically injured in the incident.

Government of Nunavut wildlife officials are investigating the incident and said that information on the bear’s health should be available in the days to come.

Until then, it’s too soon to say what exactly could have triggered the bear’s aggression.

Sentry Island, a quick boat ride from Arviat, is a popular spot for fishing and beluga whale hunting, for humans and bears alike.

Over the last year, residents say there have been higher than usual numbers of bears coming through the community, with some of those visits creating dangerous encounters with community members.

But Gibbons died outside the community, in a place bears don’t typically interact with humans, noted John Main, MLA for Arviat North-Whale Cove.

“We’ve definitely noticed an increase of bears coming into the community. Deterrent work is important, but this is an island that’s about 10 kilometres away from the community,” he said. “So it’s not necessary part of it—it’s wilderness.”

Main said the community should wait for the results of the investigation before wildlife officers or the local HTO make any decisions or changes on how to manage the potential threat bears pose to the community and surrounding areas.

“The problem isn’t going away,” Main said. “I hope the community will eventually get together to discuss this and make sure no family ever has to go through this again.

“At this point, everyone is just in shock and grieving,” he said. “We’re all rallying behind the family.”

“He was a young father and a good person. It’s fair to say he’ll be missed.”