“We didn’t see much benefit for the community” 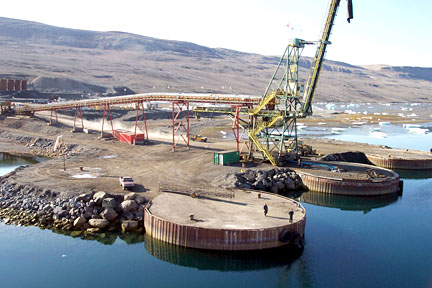 Here’s how the old port at Nanisivik looked in 2005. (FILE PHOTO)

People in Arctic Bay were among first to hear about the federal government’s downgraded plans for a Nanisivik naval facility.

Elliott said that move isn’t a blow for people in the community, because they never expected to benefit from the project in the first place.

Arctic Bay, located about 20 kilometres east of the former Nanisivik mine site, has a history of shared infrastructure with the former lead-zinc mine.

Rodney Watson, an engineer overseeing the project for the federal department of National Defence, told Arctic Bay’s Economic Development Committee about the cutbacks in early February.

Watson said the original plan for a $160 million upgrade to the old dock, once used for shipping ore out of the now-defunct mine, would be scaled down to a $60 million fueling station for Arctic offshore patrol ships.

Although the idea of transferring the former mine site into a recreational complex, a Nunavut Arctic College campus, or a military training centre, were discussed, Elliott said these never became serious options.

As for the proposed fueling station, people in Arctic Bay mainly saw it as a place where they sell local products.

“But it sort of just shrank from there,” Elliott said. “We didn’t see much benefit for the community.”

In fact, many people in Arctic Bay “breathed a sigh a relief” when they heard about the downgraded project, he said. Many hunters worried about the effect of ship traffic on marine wildlife.

Elliott said the federal government continues to ignore an important element of protecting Arctic sovereignty: the communities that live on the front lines.

“We’re here 365 days of the year, why do we have to prove that?” he said. “The government should maybe continue to invest in the people who live here and continue to exert sovereignty every day. Hopefully, they’ll put that money into bringing down the cost of food.”

Search and rescue infrastructure is another need in the High Arctic.

Rather than look to new projects, Elliott said the federal government should spend money to upgrade the current department of National Defence infrastructure at Resolute Bay’s Polar Continental Shelf Program or its local military training facility.

If the cutback to the Nanisivik project was caused by the high cost of building in the High Arctic, Elliott hopes the government is now able to see the challenges facing Nunavut in building and maintaining infrastructure.

“Maybe they’ll finally understand what we’ve been saying all along,” Elliott said. “This is a reality for us.”