Arctic beasts are shrinking in size due to climate change: study

Researchers find that winter rain is interfering with muskox’s diet 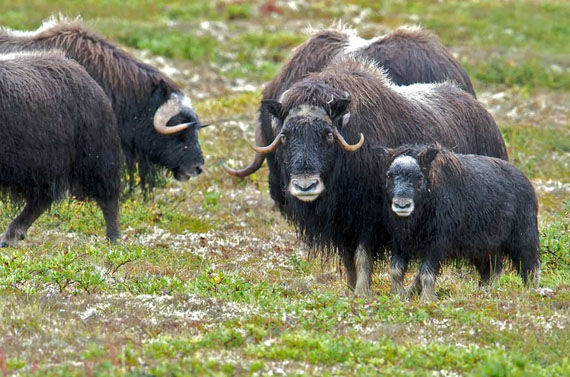 A muskox and its calf pictured in the Bering Land Peninsula National Preserve in Alaska. New research suggests that muskox who are pregnant through the winter months are giving birth to undersized calves, due to an increase in rainfall that makes it harder for muskox to access food sources. (PHOTO COURTESY OF US NATIONAL PARK SERVICE)

The muskox, or umingmak, has long been one of the Arctic’s largest beasts, but new research has found the species is shrinking in size in some parts of the Arctic as a warming climate makes it harder for pregnant muskox to stay properly nourished through the winter months.

A new study published this month in Scientific Reports pinpoints how and why the Arctic mammal is vulnerable to climate change.

The research, conducted by biologists at Colorado State University and the Wildlife Conservation Society, looks at how increasing temperatures, declining sea ice and altered wind and rain patterns have affected the health and abundance of muskox in Alaska and Russia.

Biologists found that female muskox who are pregnant in the winter are giving birth to undersized calves—some of them up to 15 per cent smaller than the average-sized calf.

The researchers say that this poor birthweight is linked to malnutrition; pregnant females are struggling to find enough food to support their offspring, in utero and as young calves.

Typically, muskox feed on lichen, moss and other plants, which they harvest in wintertime by pushing their hooves or snouts through the snow.

The study points heavily at the link between the health risks posed to Arctic mammals by an increase in winter precipitation, or as the study calls it, “rain on snow events.”

Rainfall creates a crust or icy barrier that makes that food harder to harvest or even inaccessible.

And the effects of altered rain and wind patterns can have a more immediate and deadly impact on muskox herds. Researchers looked at a particular incident: a February 2011 event along the northern coast of the Bering Land Peninsula in Alaska, when a tidal surge entrapped a group of some 50 muskox in ice, killing all the animals.

That sort of wind-driven polar ice surge has a name in Inupiat: it’s called ivu or ivuniq.

That suggested to the report’s authors that Inuit traditional knowledge could be helpful in better understanding those climate events and their long-term impact on species.

While the tidal surge observed in 2011 may be considered a freak weather event, climate models suggest that winter rain will become more common in Arctic regions, posing an ongoing threat to the health of muskox herds.

But the latest study only followed muskox calves until age three; researchers note that more data is needed to understand the full impact of a changing climate on the animal’s size and health.