$1,500 goes for each non-profit group to fill sealift container with cans 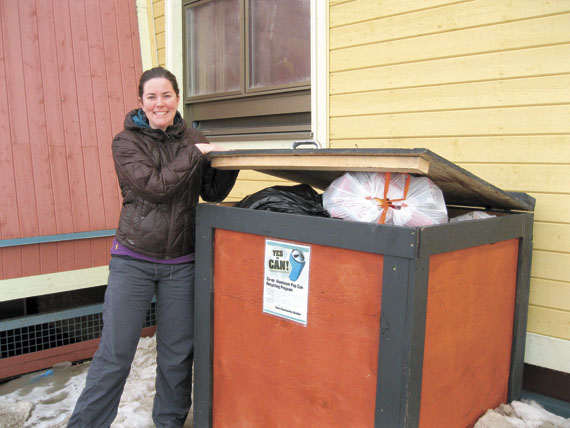 If you want to keep your pop cans out of landfills in Nunavut, there’s generally only one way to do it — and that’s through Arctic Co-operatives Ltd..

In 24 or Nunavut’s 25 communities, the ACL program offers people a chance to drop their empty cans in recycling bins at the co-op stores.

The ACL then offers the use of its shipping and supply system to take pop cans out of communities.

Shipping containers loaded with supplies from the South normally go back empty. So why not pack recyclables in the empty containers to be taken back for re-use?

“We’re just providing the means [to recycle] through the co-op systems, through Nunavut Sealink and Supply to get the product brought back south and to the recyclers,” said Duane Wilson, ACL’s vice-president of merchandising and logistics.

The co-op has just entered the third year of its recycling program, which started after the Government of Nunavut concluded it could not cover a territory-wide program of its own.

“This is to fill a breach where nothing existed before,” Wilson said.

ACL funds the program in part through a 10-cent charge on disposable plastic grocery bags.

Collection of cans is left up to individual co-op stores. As an added incentive for communities to collect cans, ACL offers $1,500 to any community-oriented non-profit groups who can fill a sealift container with aluminum cans.

The money usually goes to schools and youth programs that can organize collection drives, Wilson said.

“The school in Hall Beach has used their proceeds from recycling to run a breakfast program, and send some kids out on traditional hunting and fishing excursions,” he said.

What groups do with the $1,500 and how they collect the cans is up to them, he said.

“It’s not for me to judge. If that’s the priority of the community, then that’s great,” Wilson said. “We’re only too happy to help them meet their objectives.”

The program has seen steady success since its first sealift season in 2011, with a total of 19 sealift containers of aluminum shipped out of Nunavut, amounting to some 750,000 pop, beer and other aluminum cans. A container typically holds up to 40,000 aluminum cans, Wilson said.

These totals don’t include the three million cans and bottles that the co-op shipped out of Rankin Inlet in 2011, which were left over from a GN pilot project in that community.

“They just never lifted that material out,” said Wilson. “So we helped get that out in the fall of 2011.”

The most recent community to be added to the ACL recycling program is the capital itself. Les Petits Nanooks daycare centre signed on last summer, and has filled up one sealift container since then, with another “well underway” to be filled by October, according to its director Carine Chalut.

Les Petits Nanooks takes aluminum cans at two collection points — one by Ecole des Trois Soleils and another in the city centre near the shoreline.

“We don’t really have the means right now to collect a tonne,” said Chalut, noting that several containers’ worth of aluminum could be collected in Iqaluit. “But again, it’s volunteer-driven, and not everybody can do that.”

Stéphane Daigle, the co-op’s regional manager for Nunavut, said Iqaluit could potentially pack as many as 14 containers per year with aluminum cans.

“It’s a lot of work to sort the cans out, and to make sure they’re properly bagged,” he said. “But at the end of the day, the funds are for the organizations that administer the program.”

The Hamlet of Arviat has demonstrated the greatest success at collecting pop cans, having filled six sealift containers since the start of the program.

For a community numbering less than 500 residents, Kimmirut has shown the most impressive results, said Wilson, shipping out two containers’ worth – or 80,000 cans.

Once shipped out, the aluminum is sold to recyclers in southern Canada. Proceeds from this are “nowhere near close” to covering the costs of the program, said Wilson, with the gap still covered by charges on the single-use plastic bags in the co-op stores.