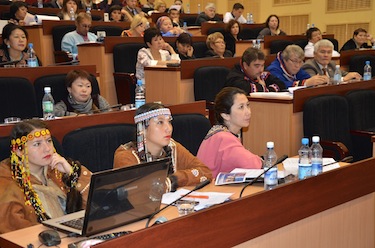 In September the RAIPON council members from all regions of Russia met in Petropavlovsk in the Kamchatka region of Russia’s Far East. Earlier this month the Russian ministry of Justice said the indigenous organization’s activities were “illegal.” (PHOTO COURTESY OF THE ARCTIC COUNCIL’S INDIGENOUS PEOPLES SECRETARIAT) 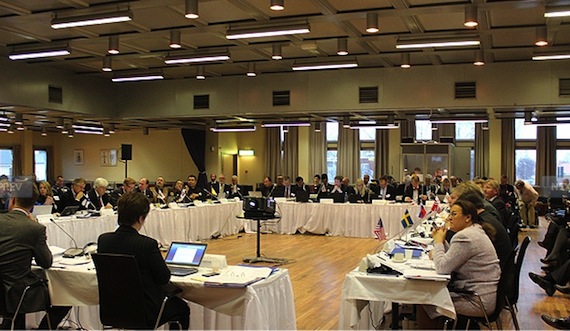 At this week’s Arctic Council meeting in Haparana, Sweden, senior Arctic officials and indigenous permanent participant groups issued a statement expressing their “concern” about a move by the Russian ministry of Justice to suspend the operations of the Russian Association of Indigenous Peoples of the North, Siberia and Far East, the association representing 41 indigenous groups and more than 250,000 indigenous people across the Russian Arctic. (PHOTO COURTESY OF THE ARCTIC COUNCIL)

The Arctic Council’s senior Arctic officials and permanent indigenous participants have criticized a move by Russia’s ministry of justice to suspend the operations of the Russian Association of Indigenous Peoples of the North, Siberia and Far East.

Known as RAIPON, the association represents 41 indigenous groups and more than 250,000 indigenous people across the Russian Arctic and sits as a permanent indigenous participant in the Arctic Council, along with the Inuit Circumpolar Council, the Saami Council, the Arctic Athabaskan Council and the Gwich’in Council International.

The statement, issued by senior bureaucrats from Arctic Council member nations, who are meeting, along with the permanent participants, Nov, 14 and 15 in Haparanda, Sweden, says that:

The Arctic Council’s statement, which was also supported by Russia’s SAO Anton Vasiliev, came in response to a move from officials at the Russian ministry of Justice, who gave RAIPON an order Nov. 1 to suspend operations until April, 2013, because it said RAIPON did not comply with Russian federal law.

This statement issued by the SAOs and permanent participants is unusual in the history of the Arctic Council. The body, was formed in 1996 for Canada, Denmark, Iceland, Finland, Norway, Sweden, the United States and Russia, to discuss common issues, focus on environmental protection and avoid political disputes, although many want have said they the council to expand its agenda to deal with hot-button issues like climate change, military activity or the laws governing the harvest and trade of marine-mammal products.

A Nov. 8 release from the Russian Agency of Social Information said the ministry found that “not all regional offices of the association are legal entities” and concluded that RAIPON’s “activities are illegal.”

In addition to responding to RAIPON’s absence at the Arctic Council meeting, in Haparanda the council’s six working groups also reported on their various ongoing projects, such as a report on ocean acidification in the Arctic, the Arctic Biodiversity Assessment, and the Arctic Ocean Review, which are expected to be ready when the member nation’s ministers meet in Kiruna in May 2013.

Also on the meeting’s agenda: drafting of the ministerial declaration and the Kiruna Statement, which will both be released next May.

The Kiruna Statement is expected to be about the Arctic as a homeland, “a vulnerable environment in need of protection,” according to the Arctic Council’s indigenous peoples secretariat.

The Kiruna Declaration is expected to focus on the rights of indigenous peoples and the interests of all Arctic residents, launch a project on traditional knowledge, and set up a task force on reduction of black carbon emissions.

The declaration may also contain decisions on the inclusion of new permanent observer applicants and on the need for financing the work of the permanent participants at the Arctic Council.

With the chairmanship of Arctic Council then going to Canada, where it will be chaired by Nunavut MP Leona Aglukkaq, the problems facing RAIPON may end up getting passed on to Canada.