Terry Audla: “With China and the EU, we need to look at them closely” 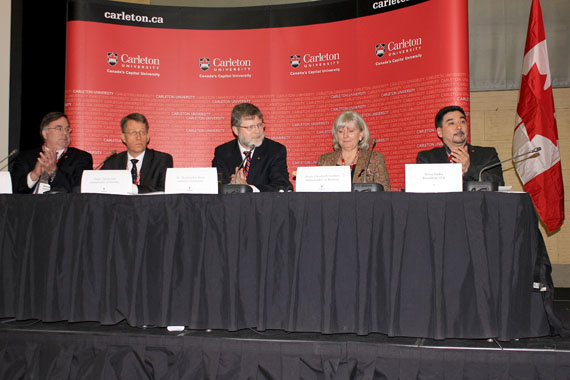 Terry Audla, right, the president of Inuit Tapiriit Kanatami, at a Carleton University-led panel discussion in Ottawa Jan. 30 on the future role of the Arctic Council. On the cusp of Canada assuming the helm of the council in May, panelists — including the ambassadors of Norway and Sweden — discussed issues such as resource development, climate change and giving observer status on the council to players such as China and the European Union. (PHOTO BY LISA GREGOIRE)

Many are knocking but few should enter, says Terry Audla, president of Inuit Tapiriit Kanatami.

Speaking to an audience of 120 or so bureaucrats, political aides, consultants, scientists, students and diplomats during a panel discussion in Ottawa Jan. 30, Audla said the Arctic Council should be cautious about opening up observer status to applicants such as China and the European Union who haven’t always respected indigenous rights, both abroad and at home.

“It’s a dilemma,” said Audla, considering the Inuit tradition of dialogue and negotiation.

But the council runs the risk of seeing its agenda being diluted or sidetracked by special interests.

“Permanent observer status in the Arctic Council is crucial, but we think with China and the EU, we need to look at them closely.”

Norway always supports inclusion over exclusion, said Norwegian Ambassador Mona Elisabeth Brøther, another panelist, but only if those potential members agree to support the council’s objectives and to respect aboriginal rights.

This discussion wouldn’t have happened 17 years ago when the council was first created and no one but northern states showed an interest in the Arctic Council, she added.

But climate change, the economic potential of the Northwest Passage, Arctic resource development and sovereignty — to name a few high profile issues — have quickly increased the relevance, and potential influence, of the council.

Created in 1996, the council is tasked with promoting cooperation, coordination and interaction among Arctic states. It consists of eight nations — Canada, Denmark, Finland, Norway, Sweden, Iceland, the Russian Federation and the United States — along with six permanent aboriginal bodies, including the Inuit Circumpolar Council.

The Arctic Council currently has six “observers,” including France and Germany, who member states have decided can contribute to their work. Another 14 states and organizations have applied for observer status including the European Union, South Korea, China, India, Japan, Greenpeace and the Association of Oil and Gas Producers.

A decision on who gets in will be made at a meeting in May in Stockholm just before Sweden relinquishes the chairmanship to Canada.

The incoming chair, Nunavut MP Leona Aglukkaq, said in October 2012 that applicants must “respect and support indigenous peoples in the Arctic region.”

“The Arctic Council is at a crossroads,” said Tauriainen. For years, members have compiled and publicized scientific studies and shared best practices regarding resource development and environmental preservation.

But it’s time for council members to influence domestic and international policy and legislation, “to produce concrete results.”

It’s tricky though. Countries such as Norway and Russia have co-management agreements to share fish stocks, for instance, and might not appreciate interference in that relationship.

It will be a challenge for the Arctic Council to carve out a role within those kinds of multi-national agreements, Brøther said.

Inuit, for their part, have consistently tried to pry their way into those many and complicated international discussions and are only recently having success, Audla said.

With the settling of land claims and the higher international profile of their culture, Inuit now have some control over resource and wildlife management but they are still subjected to what he wryly described as “white noise”: policy discussions outside the North that exclude Inuit interests and impact their livelihood and the northern economy.

An audience member, for example, asked whether there should be a moratorium on commercial fishing in the increasingly ice-free Arctic Ocean until fish stocks have been properly assessed.

Audla responded that facts are always preferable to myth when making decisions — a pointed dig at the EU’s seal skin ban — but stressed that Inuit have a right to sustainable economic development and self-sufficiency.

He also suggested that Inuit, who have managed wildlife harvesting for centuries, would be happy to make suggestions on how southerners harvest and process the foods in their diet, a system full of expensive, imported products and plagued by frequent meat recalls.

“How we live off the land is the greenest possible way of living. Always will be. We’re not interested in animal husbandry and corralling animals and forcing them into confined spaces,” Audla says.

“It’s free range, 100-mile diet. People need to understand: the Inuit way of life is how people are now wanting to live their lives.”

Inuit will continue to fight to protect that way of life, he said, and the Arctic Council is a helpful forum to give voice to their concerns.

Panelists agreed that with the increased profile of northern issues, the Arctic Council has a tremendous opportunity to educate the public about issues affecting northern peoples including the changing climate and the changing economic environment.

But member states must also advocate for the necessary infrastructure, they said — roads, ports, search and rescue systems, for instance, as well as regulatory frameworks — to allow for responsible northern development.

Only then can people who actually live in the north benefit from the coming wave of interest and investment.