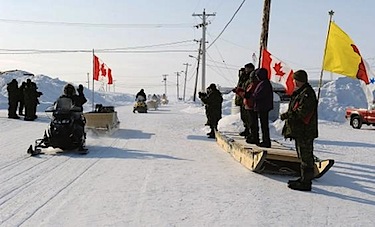 Canadian Rangers patrols return to Resolute Bay on April 25, after completing sovereignty patrols during Operation Nunavlivut 2012. The return was marked by a closing ceremony as they rode their snowmobiles past dignitaries. Canada “has taken serious measures to ensure that, in the future, it will have the physical capabilities to project and sustain a government presence in the region, enforce Canadian law, and ensure respect for its national sovereignty,” says a new report on Arctic security. (PHOTO BY MATTHEW MCGREGOR/COMBAT CAMERA/DND)

A military buildup in the Arctic is possible, says a new report, Climate Change & National Security: The Arctic as a Bellwether, which suggests non-Arctic states should look closely at the Arctic whether it embraces conflict or cooperation.

“The lesson to the rest of the world might be to anticipate changes and adapt and/or react as soon as possible,” the report says. “With global warming, time is of the essence.”

As the ice melts, many Arctic states have already begun to re-examine their military capabilities to operate in the Arctic region, says the report, prepared for the Center for Climate and Energy Solutions, an independent, non-profit organization working on energy and climate change policy.

Some Arctic states have started to rebuild their military forces, while most of the other states are drawing up plans to begin the rebuilding process, the report says.

For the report, lead author Rob Huebert, associate director of the Centre for Military and Strategic Studies at the University of Calgary, considered the potential for instability and conflict in the Arctic and offered recommendations on how Arctic states can ensure the Arctic develops in a “cooperative and peaceful manner.”

Key among those recommendations: the Arctic Council should lift its ban on discussing military issues.

The report notes how last month the senior military leaders of all eight Arctic states met in Goose Bay, Labrador.

The exact nature of the talks is unknown, the report says, but “the fact that this meeting includes all eight Arctic Council members suggests possible developments on the security front.”

If the Arctic Council remains “resistant to taking on military security issues formally,” cooperation still could take place between two or more member nations, it says.

In any event, “the Arctic states will need to acknowledge and deal with the renewal of military strength in the Arctic. This need runs counter to the tendency of states to publicly downplay the potential for military conflict in the Arctic in order to emphasize their legitimate desire for cooperation.”

Continued monitoring of national and international developments in the Arctic will help tell whether conditions are tipping more toward cooperation or more toward competition, the report says.

“It is even more difficult to predict the relationships of the Arctic states beyond the Arctic,” it says. “Will Russia and the United States be able to resolve the developing tensions regarding NATO expansion or Iran, or will these disputes escalate and spill over into their Arctic relationship.”

You can read the 50-page report, which contains an overview about each Arctic state’s military activities, here.