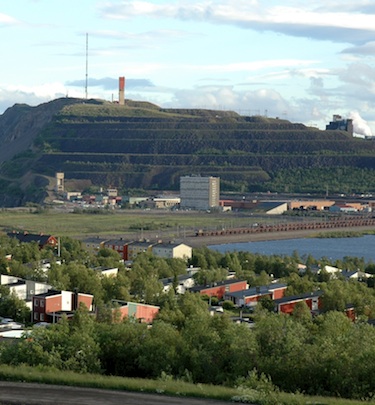 Ministers from the eight Arctic Council member nations — Canada, the United States, Iceland, Denmark, Norway, Sweden and Finland, will go deep underground in Kiruna iron mine May 15 as part of the activities planned during their meeting. (FILE PHOTO)

On May 15 if you want to find Leona Aglukkaq, Canada’s minister responsible for the Arctic Council, look 540 metres underground in Kiruna, Sweden.

That’s where Aglukkaq and the other top ministers from the Arctic Council member nations plan to eat lunch during their one-day ministerial meeting, during which Sweden will pass the chair of the eight-nation forum to Canada.

The iron mine, owned by Luossavaara-Kiirunavaara AB, a large Swedish mining company, is the largest underground iron mine in the world — and the economic driver behind Kiruna, the town of 18,000 where the council’s ministers will meet May 15.

So, it’s a fitting venue to show that the Arctic is developing, said Gustaf Lind, Sweden’s chair of the Arctic Council’s senior Arctic officials, in a May 6 news conference webcast from Stockholm.

While a helicopter excursion is also planned for the ministers on May 15, they may end up going even further down into the mine — 1,300 metres underground.

Lind said it’s still not certain just which of the ministers will attend the main ministerial meeting, which will take place in the town hall of Kiruna.

But John Kerry, the United States Secretary of State, may attend the gathering.

Lind said he didn’t want to reveal all the outcomes of the meeting.

But, among other things, Lind revealed the ministers will approve a statement called “Vision for the Arctic,” their common vision for sustainable development in the Arctic.

This vision will guide the council for its next 16 years, Lind said, pointing out that with the May 15 hand-over of the Arctic Council to Canada, the Arctic Council ends the first round of two-year rotating chairmanships among its member nations.

Before taking over the chair of the Arctic Council in Nuuk in 2011, Sweden said it wanted to see agreement on a tool for prevention, preparedness and response when extracting oil in the Arctic.

To that end, ministers will sign an Arctic Marine Oil Pollution Preparedness and Response Agreement May 15 in Kiruna.

This will be a framework for cooperation to prevent oils spill or responses to oil spills in the Arctic, Lind said.

And it will be the second binding agreement accepted by the Arctic Council — the first being an internationally binding search and rescue agreement approved in Nuuk in 2011.

On May 15 ministers will also accept various reports, including:

• Arctic Biodiversity Assessment, which looks at 21,000 cold-loving Arctic species and follows on an earlier report which looked at 22 “indicators,” from polar bears to Arctic char to murres, whose state of health shows the Arctic has changed “dramatically” during recent decades, causing the disappearance of habitats for Arctic plants and animals;

• Arctic Resilience, a report on the capacity of Arctic residents to manage and overcome disturbances such as mining developments, part of a larger Arctic Change Assessment for the Arctic Council; and,

According to information on the Arctic Council website, “responsible entrepreneurship” means that companies freely assume responsibility “beyond what is required by applicable legislation” on how their activities affect the environment, labour conditions, human rights and corruption in the markets in which they operate.

As well, Lind said the ministers will make decisions about the 14 applications for observer status on the council — which includes applications from China and the European Union.

What the Arctic Council ministers won’t deal with directly is climate change: that’s for the United Nations to deal with, Lind said, although the Nuuk Declaration, produced at the end of the Nuuk ministerial meeting of 2011, urged nations to work on a global agreement to keep the world’s average temperature rise within two degrees C — something scientists say will result in a much steeper temperature increase for the Arctic.

In 2011, the Arctic Council also officially recognized that “climate change and other negative factors” have impacted the traditional livelihoods and food safety and security of Arctic indigenous peoples and other Arctic residents and communities.

At the end of the Kiruna meeting, ministers will release the “Kiruna Declaration,” which is expected to focus on the Arctic as a homeland, “a vulnerable environment in need of protection.”

This declaration will also provide insight into what Canada plans to do during its two-year period as chair of the Arctic Council.