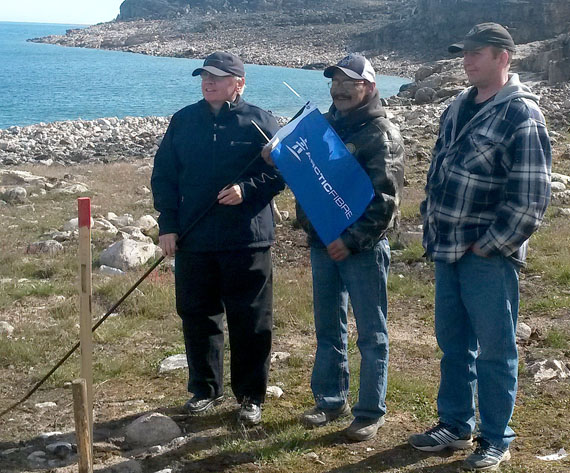 Arctic Fibre Inc. wrapped up its seven-community tour of proposed cable landing spots this past weekend with a declaration that they have now confirmed their feasibility.

“In most instances, we were able to confirm the engineering studies Arctic Fibre has undertaken over the past two years,” Douglas Cunningham, Arctic Fibre’s CEO, said in a news release.

The company will now get ready to submit its plans to various regulatory bodies, including the Nunavut Impact Review Board and the Nunavut Planning Commission

In Cape Dorset, Igloolik and Taloyoak, Arctic Fibre’s team of consultants and contractors changed their proposed landing locations in response to local knowledge from community residents, who helped them find locations better able to avoid damage to the cable from ice scouring and waves.

The company also changed a proposed land route across Boothia Peninsula that would connect Taloyoak.

The modified routed would run parallel to the northwest shorelines of Middle Lake and Angmaluktok Lake before going through hills and entering Lord Mayor Bay.

“Minister Peterson relayed to us his frustration of being one of the only elected officials in the country unable to fully participate in a recent video conference with Canada’s minister of finance. The installation of the Arctic Fibre network will enable all Nunavummiut and levels of government to be full participants in video conferencing, and much more,” Cunningham said.

Another backbone line would lead from a point near Cape Dorset past the east coast of Hudson Bay to the Cree-Inuit community of Chisasibi.

From there it would eventually connect with New York City through Montreal.

The company has submitted a proposal to Industry Canada for about $230 million in one-time spending to connect 23 communities in Nunavut and Nunavik to the fibre optic cable with spur lines and microwave hops.