Arctic ice cover declines at “near average rate” in May: data centre 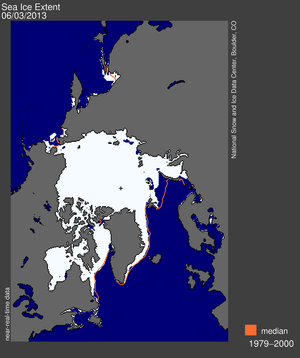 Arctic sea ice extent for May 2013 was 13.10 million square kilometres. The magenta line shows the 1979 to 2000 median extent for that month. The black cross indicates the geographic North Pole. (IMAGE COURTESY OF THE NSIDC)

Arctic sea ice extent declined at a near-average rate through May, but overall it remained below average compared to the 1979 to 2000 average, the Colorado-based National Snow and Ice Data Center said June 4.

As for temperatures, lower than average temperatures were the rule this past month for both Greenland, the Eastern Arctic and Alaska, while temperatures across much of Siberia were above average.