Arctic Inspiration Prize announces shortlist for up to $3M in awards 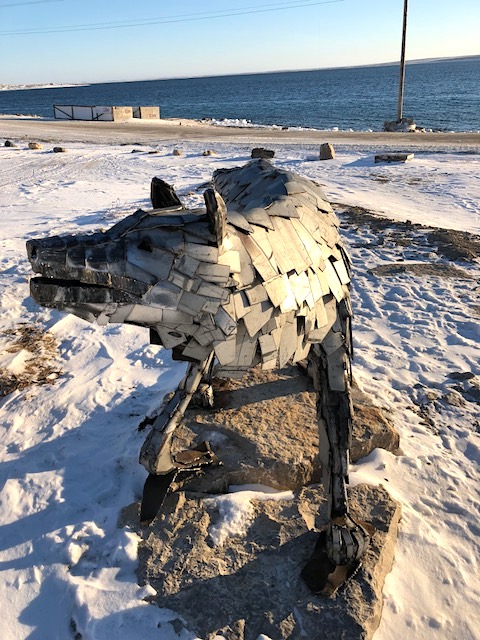 From Scrap to Art is a Cambridge Bay–based project, shortlisted for an Arctic Inspiration Prize, that would see young welders using scrap metal to build on their skills and create works of art, such as this wolf made of scrap metal behind the Cambridge Bay municipal office. (PHOTO BY JANE GEORGE)

The Arctic Inspiration Prize has announced its annual shortlist, and two of the three contenders for a $1-million award are based in Nunavut.

The shortlist was picked by members of the Arctic Inspiration Prize’s regional selection committees for Yukon, the Northwest Territories and Inuit Nunangat. Ten shortlisted projects, vying for awards in three categories, were announced on Wednesday, Nov. 21.

The winners will be announced on Feb. 12 at the 2018 Arctic Inspiration Prize awards ceremony in Whitehorse, Yukon.

Up to $3 million will be awarded in three prize categories.

Projects shortlisted for an award of $1 million:

• Northern Compass: this program aims to create tools and a support network to address and eliminate barriers faced by youth in the three territories who want to continue their post-secondary education or enter the workforce.

• Pirurvik—A Place to Grow: Early Childhood Education for Nunavummiut: The Pirurvik Preschool in Pond Inlet, led by Tessa Lochhead and Karen Nutarak, provides early childhood education rooted in the Inuit Qaujimajatuqangit principle of Pilimmaksarniq, the practice of allowing children to learn at their own pace. The project’s goal is to build on current programming for infants and toddlers aged three months to five years in seven communities across Nunavut’s three regions.

• Uqarluta Inuinnaqtun—Let’s Speak Inuinnaqtun: The project, under the leadership of Pamela Hakongak Gross of the Pitquhirnikkut Ilihautiniq, or Kitikmeot Heritage Society, wants to set up a full-time immersion program in Inuinnaqtun for western Nunavut youth, a mentor/apprentice program and an intensive language documentation program. The goal is to revitalize Inuinnaqtun, spoken fluently by fewer than 600 people.

• Nunami Sukuijainiq: A Youth Arctic Ecology Land Camp Program, a land-based and hands-on science education program designed for Nunavik youth. With this project, youth in Nunavik will participate in Arctic ecology land camps to stimulate and nurture their interest in science and to help them develop skills as future environmental leaders in Nunavik.

• Nunavut Law Program would provide a Nunavut-based professional legal education to Nunavummiut. The proposed project will provide students with professional hands-on learning opportunities, as well as a strong foundation in Inuit traditional law.

• Tr’ondëk Hwëch’in Teaching and Working Farm Extended-Season Greenhouse Construction would develop an extended-season cold-climate greenhouse, the first of its kind in Yukon, that would operate for up to 10 months of the year.

• Traditional Techniques Tweaked to Galvanize Indigenous Northern Artisans would create an association of northern Indigenous artists and crafters across the Gwich’in Settlement Area.

• Transforming Lateral Violence would work at producing a significant reduction in the frequency and intensity of lateral—that is interpersonal—violence within Yukon’s Indigenous communities.

• From Scrap to Art would develop teaching materials and set up a dedicated welding studio in Cambridge Bay where participants can learn and teach others the skills of welding and transforming discarded metal into art.

• Truth & Reconciliation: A Call to Action from Youth/Millennials would produce practical and culturally relevant recommendations to help government leaders create a better future for all Yukoners.