Projects include performing arts network, hearing support in the classroom 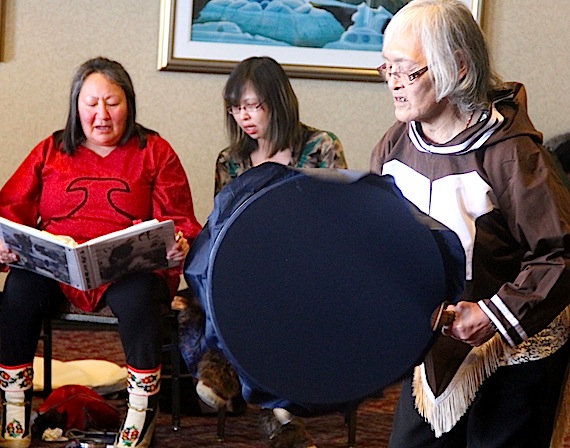 The Qaggiavuut Society’s Qaggiq project, to develop performing arts opportunities across the Arctic, is one of three projects shortlisted for the 2015 Arctic Inspiration Prize. (FILE PHOTO)

The Qaggiq project has been shortlisted as a finalist for this year’s Arctic Inspiration Prize, a $1 million dollar fund targeting wellness projects across Canada’s North.

The Qaggiq project, spearheaded by the Iqaluit-based Qaggiavuut Society, is a two-year research and training initiative that targets performers from across the Canadian Arctic, including skills workshops and residencies.

The project is led by a team of arts administrators and educators from across Nunavut, Nunavik and Northwest Territories, along with the Ottawa-based National Arts Centre and National Theatre School in Canada.

Along with Qaggiq, two other projects were shortlisted for the cash prize, including “Better Hearing in Education for Northern Youth,” a project that addresses hearing loss as an underlying cause of poor literacy, academic success, school attendance and graduation rates.

Based out of the University of Guelph’s audiology program, the program focuses its work in Nunavut’s Qikiqtani region through classroom-based amplification technology as well as training and support for educators.

The third is the Yukon-based “Tri-Territorial Recreation Training Project,” which aims to expand recreation programming to Canada’s most northerly communities.

One of the programs will be selected as finalist at the 2015 Arctic Inspiration Prize awards ceremony, to be held in Ottawa Jan. 27.

The cash is awarded by the S. and A. Inspiration Foundation, a fund started by Sima Sharifi and Arnold Witzig of Vancouver, through Université Laval’s ArcticNet program.