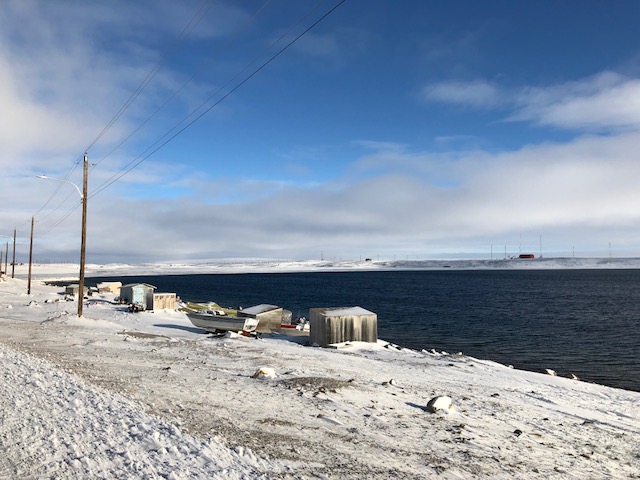 Open water in Cambridge Bay persists in early October. An ice-free summer might look attractive to some in the western Nunavut community where heavy ice conditions in the vicinity recently prevented the arrival of the large resupply barge. (PHOTO BY JANE GEORGE)

A new report by the Intergovernmental Panel on Climate Change foresees some dire consequences from rising temperatures in the Arctic, unless dramatic moves are made to curb the use of fossil fuels.

The 782-page report, released Oct. 8 in South Korea, looks at the impacts of global warming of at least 1.5 C above pre-industrial levels—that is, since about 1850. The global average temperature has already risen by one degree since that time.

Even one degree rise in temperature can make a big difference, and in any warmer world, Arctic ecosystems will be at a “disproportionally higher risk,” the IPCC said.

After an increase of 1.5 C, the impacts could include the “irreversible loss of the Greenland ice sheet,” which could result in a multi-metre rise in sea levels over hundreds to thousands of years, the IPCC report said.

These instabilities could be triggered by around 1.5 C to 2 C of global warming, the report said.

And, in some Arctic land regions, an increase of 2 C over pre-industrial levels could result in warming of eight degrees, the report said.

At higher degrees of global warming, in the order of 3 C, a different type of tipping point in permafrost may be reached that would be “essentially irreversible,” the report said.

The report breaks down the various possible impacts for the Arctic as the world warms:

• At warming of 1 C or less: Arctic summer sea ice is likely to be maintained, there will be habitat losses for polar bears, whales, seals and seabirds but there may be some benefits for Arctic fisheries, while on land, the cold extremes could warm up by 5.5 C.

• At warming of 1.5 C to 2 C: habitat losses may be “critical,” the summers will likely be ice-free once every 10 years and the benefits for fisheries continue, while the cold extremes could warm by as much as 8 C and there will be more trees and shrubs.

• At warming of 2 C to 3 C: the Arctic is “very likely” to be ice-free in summer, with continuing habitat loss and fisheries benefits, but there is “drastic regional warmth” in the Arctic and “collapse of permafrost,” which could amplify the warming through the release of more greenhouse gases.

The report, which involved 91 authors and review editors from 40 countries, says global warming is likely to reach an overall increase of 1.5 C,—that is 0.5 C degree more than now—between 2030 and 2052 if warming continues to increase at the current rate.

And it urges “rapid, far-reaching and unprecedented” action to find ways to curb this rise in temperature and limit the impact of climate change.

But this will take enormous cuts to greenhouse gas emissions, reducing them by half by 2030.

The 2015 Paris agreement on climate change aimed to keep the world’s global temperature to “well below” 2 C and to limit that increase to 1.5 degrees above pre-industrial levels.

But the global temperature has already risen by 1 C.

“One of the key messages that comes out very strongly from this report is that we are already seeing the consequences of 1 C of global warming through more extreme weather, rising sea levels and diminishing Arctic sea ice, among other changes,” said Panmao Zhai, co-chair of the IPCC working group, in an Oct. 8 release.

The report is sure to be on the agenda of Arctic environment ministers, who are set to meet in Rovaniemi, Finland, later this week, on Oct. 11 and Oct. 12.

Canada’s environment minister, Catherine McKenna, responded on social media yesterday to the report, saying, “We have one planet, folks. It’s clear: We are the first generation to feel the impacts of climate change and the last generation to be able to stop it.”

Canada was recently among 10 signatories of an international Arctic fisheries agreement which bans fishing in the central Arctic Ocean, for at least the next 16 years, in a move to protect these opening waters to commercial fishing.