“It is time to pursue a policy of partnership in action” 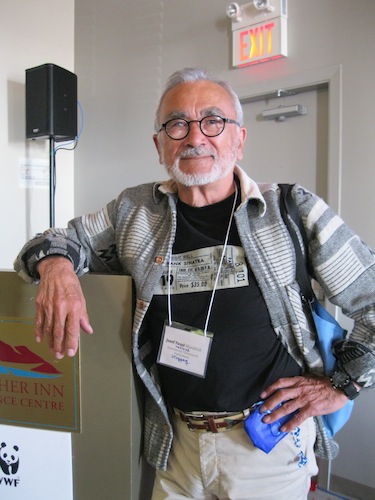 Josef Tuusi Motzfeldt, a member of Greenland’s parliament and president of the West Nordic Council, says Arctic nations have a leading role to play in directing Arctic development with the world’s “economic superpowers.” His speech closed out an Arctic conservation workshop by the WWF in in Iqaluit on June 5. (PHOTO BY PETER VARGA)

Arctic peoples may be small in number.

But they must take their place on the global stage as economic superpowers shift attention to their huge lands and resources, says Greenlandic politician Josef Tuusi Motzfeldt, who wants to see the creation of a new “Arctic Ocean Council.”

“Just a few years ago Greenland was a big, white part of the world” seen as an empty expanse on maps, Motzfeldt told an audience June 5 at the “Last Ice Area” workshop organized by the World Wildlife Fund in Iqaluit.

“Thanks to a new century of climate change, Greenland is at the centre of attention of new superpowers,” Motzfeldt said, pointing to China, India, Japan, South Korea and Singapore — who joined the Arctic Council as observers last month.

To deal with this, Motzfeldt recommended Arctic nations form an “Arctic Ocean Council” — this would be another group to deal specifically with issues such as conservation and exploitation of natural resources.

“Relations between Arctic nations continue to grow” with increasing exploration, development and exploitation of Arctic resources, he said.

This calls for a need for increased cooperation among all Arctic countries, he said.

“Now in the start of this millennium it is high time to change the relationship between states and former colonies,” Motzfeldt said. “It is time to pursue a policy of partnership in action.”

“Greenland is on its way to becoming a new Arctic superpower, but only because of its expanse and the importance of its natural resources,” he said.

This is in complete contrast to the country’s small population of 57,000 and limited infrastructure, which define Greenland as a “small state,” at best.

While this was once true for Greenland, “I don’t think it’s true any longer,” he said.

“Large states can afford to isolate themselves. On the other hand Greenland and other small states cannot afford to. We cannot be cut out of international relations as we work to our goal of independence.”

As minister of finance and foreign affairs for his country in 2009 to 2013, Motzfeldt helped usher in a new era of self government for Greenland. A new self-governance law, approved in 2008 by a huge majority in a Greenland-wide referendum, gave the island autonomous status under Denmark – and control of its own police force, coast guard, and courts.

“Can any nation not be able to decide its own fate because it is too small?” he asked. “If we do, then we become insignificant.”

Greenland’s insistence on securing exclusive fishing rights in Arctic areas have worked in its favour, allowing it to take part in oil and gas exploration in recent years, he noted.

As global warming causes Arctic ice to give way to open sea, new trade routes and easier access to natural resources are opening up.

And the world’s emerging economic superpowers are eager to expand their drive for natural resources into Arctic waters as a result, Motzfeldt said.

This is significant to indigenous people of the Arctic, he said, because they have “a first right to fishing and other natural resources of the Arctic.”

Moving forward, this puts indigenous peoples “at the front of all decisions on use of natural resources.”

“We are at a critical time in the Arctic now,” Motzfeldt continued. “We have two paths we can go down right now in international relations. One is a path of competition and conflict. The other is one of cooperation and diplomacy.”

With that, Motzfeldt recommended Arctic nations form an “Arctic Ocean council” to deal with joint issues of conservation and exploitation of natural resources.