”There’s no reason why the government can’t support this” 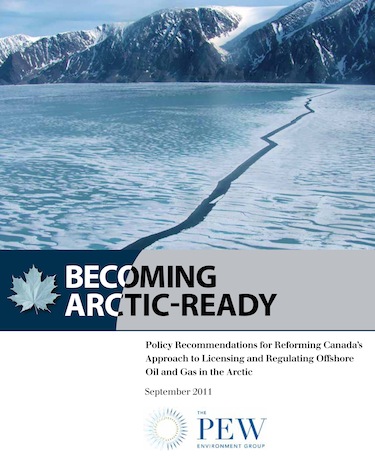 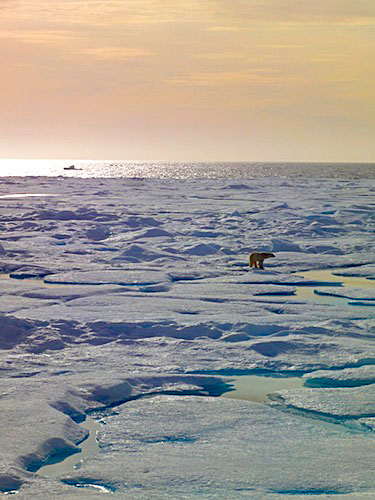 An oil spill in the Davis Strait, shown here, could be difficult, if not impossible, to quickly clean up. A new report from Oceans North called “Becoming Arctic-Ready: Policy Recommendations for Reforming Canada’s Approach to Licensing and Regulating Arctic Oil and Gas” says Inuit benefits plans and royalty sharing agreements should be negotiated in line with the risks Inuit communities bear. (PHOTO BY JANE GEORGE)

”Apt and timely” is how Mary Simon, president of Inuit Tapiriit Kantami,” describes the analysis and policy recommendations on Arctic drilling, which were released today by the Pew Environment Group’s Oceans North Canada.

The report called, “Becoming Arctic-Ready: Policy Recommendations for Reforming Canada’s Approach to Licensing and Regulating Arctic Oil and Gas,” looks at what Canada needs to consider before Arctic offshore drilling goes ahead.

And it makes 11 policy recommendations for consideration at National Energy Board’s Arctic offshore drilling review, whose roundtable meets next week in Inuvik.

These recommendations, Oceans North says, provide “a blueprint for creating an Arctic-ready future for offshore oil and gas in Canada.”

Included in the recommendations is call for a much larger role for Inuit at each stage of the oil and gas decision-making process.

“Inuit environmental assessment capability should be strengthened by providing additional resources, and the government should conduct its own Inuit consultations surrounding the assessments for exploratory activities.” the report states. “Inuit benefits plans and royalty sharing agreements should be negotiated in line with the risks Inuit communities bear.”

There’s no reason that Canada shouldn’t support this and the report’s other recommendations, said Trevor Taylor, a former Newfoundland cabinet minister for transportation, fisheries and aboriginal affairs, who is now a policy analyst for Oceans North, unless the government decides to pursue oil and gas development “at any cost.”

“There’s no compelling reason to move forward with gas and oil development without having a solid royalty-sharing agreement between the government and Inuit, and without knowing how you’re going to deal with the inevitable problems that come up. Outside that, there’s no reason why the government can’t support this,” Taylor said. “Only time will tell.”

To deal with the risk of a gas or oil spill, the Oceans North report says Canada needs to strengthen its spill-preparedness planning guidelines by looking at what other Arctic and non-Arctic jurisdictions do and incorporating that into its new regulations.

It also suggests the creation of task forces of trained local residents to act as” first responders and industry watchdogs.”

And it says government must also guarantee that it has the spill-response capacity to deal with a worst-case spill scenario.

To that end, the NEB needs to develop guidelines that outline spill response and clean-up for Arctic waters and “stimulate a new culture of industrial innovation to create Arctic-tested spill-response measures” as there’s no surety that the generally-used techniques will work in the Arctic.

• engage in meaningful consultation with Inuit groups at key stages of the process, from participation in early environmental assessments to decisions about oil-spill preparedness and royalty sharing;

• require that industry meet minimum Arctic-based standards for drilling performance and environmental protection before their bids on offshore licenses are accepted and ensure they have the money to meet worst-case oil-spill liability requirements. In Inuit land claim agreements, industry is “accountable absolutely for damages to Inuit from past and future loss of wildlife and habitat and are required to pay for remediation and restoration. Yet federal regulations cap the absolute liability of an operator in the Arctic at $40 million, an amount that could easily be eclipsed;”

• maintain or same-season relief well policy — which means a company that’s drilling must be able to drill a second well, a measure that can prevent a major spill in the event of a blowout— “to protect the Arctic and its people from multiyear blowouts” — “without the ability to stop a blowout in the same season, oil could continue spilling under the ice for nine months or longer, until the next drilling season;” and,

• add a mechanism for government review and cancellation of long-term leases in circumstances such as dramatic environmental changes, industrial accidents or national security issues.

Oceans North Canada is also sending letters to Prime Minister Stephen Harper, Indian and Northern Affairs Canada and the NEB asking for INAC to suspend new oil and gas licensing in the Arctic and for the NEB to suspend approval for existing and new offshore Arctic drilling while it conducts a full regulatory review.

Canada has not yet implemented recommendations made in 1990 by a federal-provincial-Inuvialuit review board that examined shallow-water oil drilling in the Beaufort Sea, the Oceans North report notes.

Major gaps cited then included an inability to contain and clean up a major spill in Arctic waters, unrealistic assessments of how much a clean-up would cost and a lack of consultation with Inuit.

“But over past 34 years we have been probably the most cautious of the Arctic states which it comes to development, “ Taylor said.

In Inuvik, the NEB, which visited Iqaluit, Clyde River and Pond Inlet for consultations during its Arctic offshore drilling review, will discuss the many comments and documents, such as a recent report from the WWF, which its received during its review.

Then, the NEB board will consider all the information gathered and issue a public report.

The roundtable will be interpreted into Inuinnaqtun, Inuktitut and French and you can listen over the telephone by dialing 1-888-999-9261.