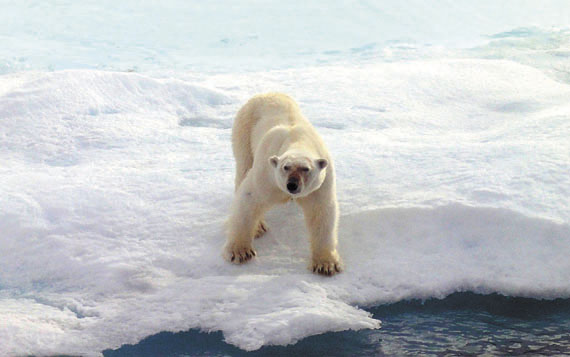 As if they didn’t have enough problems, male polar bears now have to worry about this: PCB contamination that weakens their penis bones. (FILE PHOTO)

Climate change may affect the higher latitudes of the globe more than anywhere else on earth, putting habitats like that of the polar bear at risk.

That’s because wind and water-borne pollutants — polychlorinated biphenyls, or PCBs — have been linked to lower bone density in the polar bear’s penis bone.

PCBs, used for decades in hundreds of industrial applications such as paint, rubber production and electrical transformers, have been banned by a United Nations treaty since 2001.

But the chemical breaks down in the environment very slowly and, because of air temperatures and currents, concentrate at the earth’s polar regions.

Using a hospital x-ray technique, scientists from Denmark and Canada measured the bone density of penis bones — or the baculum — from almost 300 polar bears born between 1990 and 2000 from north-eastern Greenland and the Canadian Arctic

They then compared their data to locally recorded data of a range of harmful pollutants, finding a link between PCBs and lower bone density in the polar bear’s baculum.

They also found polar bears with higher PCB levels to have smaller testes.

The exact function of penis bones, which a number of mammals other than humans have, is not known, but the scientists suggest a weaker baculum could prevent successful mating.

“If it breaks, you probably won’t have a bear which can copulate,” Danish researcher Christian Sonne from Aarhus University said in an online article in the New Scientist.

The article quotes a biologist from the University of Edmonton, Andrew Derocher, who says the impact of pollutants are compounded on malnourished polar bears unable to find enough to eat because of habitat destruction.

“Skinny bears have higher levels of circulating pollutants, so the concern is that a polar bear that is nutritionally stressed may become more vulnerable to the effects of pollution at the same time,” he said in the article.

Sonne said he now plans to study the effect of food stress and pollutants have on evolutionary changes of the polar bear.

The study on bacula, published in the February 2015 edition of Environmental Research, points out that more research needs to be conducted before PCBs can be said to cause the lower bone density in the baculum of polar bears.

An earlier study by Sonne found Industrial pollutants were causing the genitals of polar bears in East Greenland to shrink.