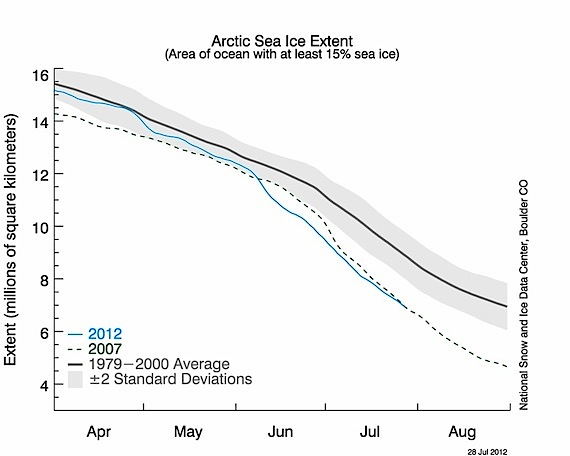 Here you can see how this year’s Arctic Ocean sea ice cover may beat the low set in 2007. (IMAGE COURTESY OF THE NSIDC) 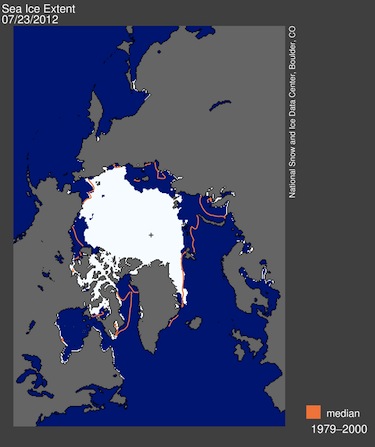 This map shows Arctic sea ice extent for July 28. The orange line shows the 1979 to 2000 median extent for that month. The black cross indicates the geographic North Pole. (IMAGE COURTESY OF THE NSIDC)

While Frobisher Bay and other Nunavut sea lanes remain clogged with ice, Arctic sea ice continued to track at levels far below average through July, with open water in the Kara and Barents seas reaching as far north as typically seen during September, reports the Colorado-based National Snow and Ice Data Center.

The NSIDC’s satellite images of ice cover show that overall Arctic ice extent on July 28, that is, the areas of ocean with at least 15 per cent of ice cover, came in as low as in 2007, when sea ice extent hit a new low.

The timing of seasonal melt onset, which can be estimated from satellite data, plays an important role in the amount of ice that melts each summer, the NSIDC says.

Unusually early melt onset means there’s less reflection of heat back into the atmosphere from ice on the surface of the water. This allows for even more solar heating of the ice, which in turn allows melt ponds and open water areas to develop earlier in the melt season.

As of July 23, sea ice extent was 7.32 million square kilometres, a bit higher than last year’s record low for this day.

However, ice cover in the East Greenland Sea was slightly more extensive than normal. Ice was pushed into Frobisher Bay by southeasterly winds.

Until late last week, the sealift vessel Qamutik was surrounded by heavy ice that had drifted into Frobisher Bay. Two Canadian Coast Guard icebreakers, the Des Groseilliers and Terry Fox, finally escorted the Qamutik and the Anna Desgagnés through heavy ice into Iqaluit July 27.

Meanwhile, air temperatures at about 900 metres in the central Arctic and the Beaufort Sea were one to four degrees C above normal during the first weeks of July but lower in the Barents, Kara, and East Greenland seas, where the temperatures were one to three degrees C lower. 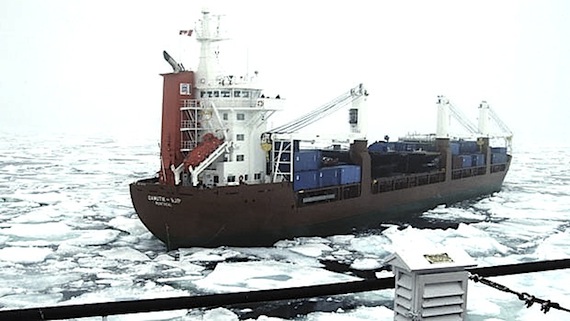 The MV Qamutik, shown here, was surrounded by the heavy ice of Frobisher Bay last week. Coast Guard icebreakers were able to carve a path through the ice to Iqaluit for the Qamutik and the MV Anna Desgangnés. (PHOTO COURTESY OF ENVIRONMENT CANADA)