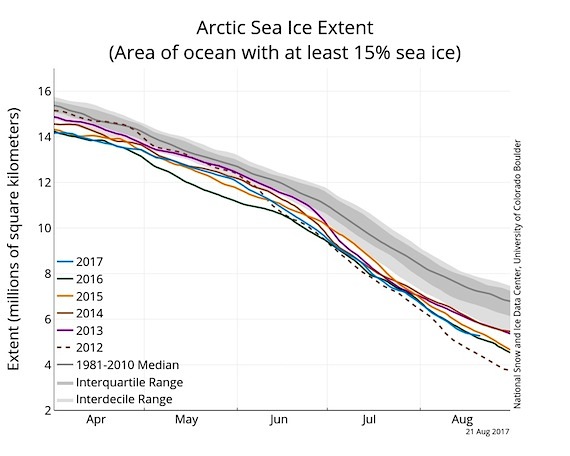 Cooler than average temperatures in much of the Arctic during August has kept sea ice loss at “a sluggish pace,” with little change in the ice edge within the eastern Arctic, the National Snow and Ice Data Centre said in its Aug. 25 update on ice conditions in the Arctic.

Arctic sea ice extent remains above that seen in 2012 and 2007, the NSIDC said, continuing a trend seen this past July when weather conditions were not conducive to ice loss.

Both McClure Strait and the Amundsen Gulf within the Northwest Passage remained blocked by ice, said the NSIDC, which uses satellite images for its reports.

This was faster than the 1981 to 2010 average rates of ice loss of 57,300 sq km per day, but slower than in 2012, which showed the fastest rate of ice loss compared to any other August in the satellite data record, the NSIDC said.

The NSIDC said that usually the rate of ice melt slows in August as the sun starts to dip lower in the sky. However, the rate of ice loss in 2017 only slowed down Aug. 17.

Melt will continue through August, the NSIDC said, as heat absorbed by the ocean during summer continues to melt the ice from below and from the sides.

The Arctic ice extent starts to get larger sometime in September when there is less sunlight and warmth.