May sea ice melts “slightly faster” than the long-term average 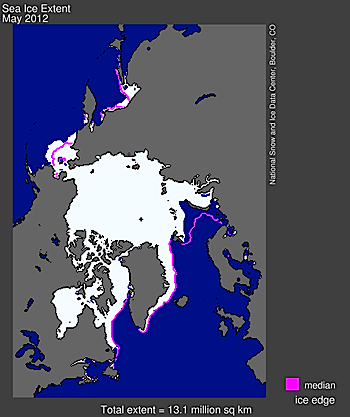 Arctic sea ice extent for May 2012 was 13.13 million square kilometres. The magenta line shows the 1979 to 2000 median extent for that month. The black cross indicates the geographic North Pole. (IMAGE FROM THE NSIDC)

After reaching near-average levels in late April, sea ice extent in the Arctic declined rapidly during the early part of May, says the Colorado-based National Snow and Ice Data Center in its recent report on sea ice coverage in the Arctic.

The rest of May saw a slower rate of decline, it said.

Air temperatures for May were higher than usual over the central Arctic Ocean and the Canadian High Arctic, the NSIDC noted.

The data, collected from the North American side of the Arctic, show thick ice north of Greenland due to wind and ocean current patterns piling ice into thick ridges.

In the Beaufort Sea, the offshore ice is fairly thin, one to two metres thick, indicative of first-year ice.

Such thin ice will be prone to melt out completely this summer, said the NSIDC.