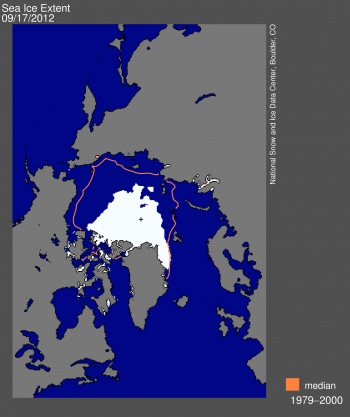 Arctic sea ice extent for Sept. 17 was 3.41 million square kilometres. The orange line shows the 1979 to 2000 median extent for that day. The black cross indicates the geographic North Pole. (IMAGE COURTESY OF THE NSIDC)

The Colorado-based National Snow and Ice Data Center says Arctic sea ice coverage this year remains the lowest recorded since 1979 — and it’s yet to reach its low for the year.

But this doesn’t mean that the Arctic in 2012 has been free of sea ice and dangerous ice floes.

The narrow, shallow southern route used by Norway’s polar explorer Roald Amundsen in 1906 to transit the Northwest Passage and the wide, deep northern route through the Parry Channel opened in 2007.

But this year only the southern route through the Northwest Passage opened, the data centre said Sept. 18.

According to Canadian Ice Service, rapid ice loss took place in the Parry Channel in July.

However, multiyear ice from the north kept at least some of the channel blocked.

Conditions in the Chukchi Sea off the North Slope of Alaska, where Shell started to drill for oil, provide another example of uneven ice conditions in the Arctic, the data centre said.

There, Shell’s operations were delayed in part due to greater than expected ice cover in the early summer, the centre noted.

Within the next couple of days, the NSIDC expects to announce that the minimum Arctic sea ice extent has been reached for the year.

But weather conditions near the ice edge can heavily influence the timing of the minimum, which has occurred as late as Sept. 23.

The current sea ice extent is already 760,000 sq. km. below the previous record minimum extent in the satellite record, which occurred on Sept. 18, 2007.

And the ice extent currently tracks nearly 50 per cent below the 1979 to 2000 average minimum extent.

Freeze-up has begun over the high latitude Arctic areas and extent has started to increase in the Beaufort Sea region, the NSIDC said.

However, extent is still decreasing on the Atlantic side of the Arctic.