Sea ice extent now slightly below 2010 levels, the previous record low at this time of year 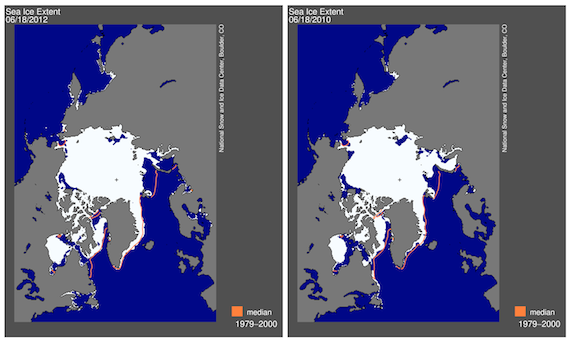 After a period of rapid Arctic sea ice loss through the first half of June, sea ice extent is now slightly below 2010 levels, the previous record low at this time of year, the Colorado-based National Snow and Ice Data Center said in a June 20 update.

And the speed at which the sea ice is melting on the Arctic Ocean puts the coverage behind 2007 — when sea ice hit a record low in September.

The main contributors to the unusually rapid ice loss to this point in June are the disappearance of most of the winter sea ice in the Bering Sea, rapid ice loss in the Barents and Kara Seas, and early development of open water areas in the Beaufort and Laptev Seas north of Alaska and Siberia, the NSIDC said.

Early melt onset, and clear skies near the solstice on June 20 provided favorable conditions for more rapid melting, and warming of the ocean in open-water areas.

A similar pattern of high pressure throughout summer 2007 was a major factor toward causing the record low September sea ice extent that year, the NSIDC said.

While these patterns and conditions have looked similar to 2007, over the last couple days the high pressure pattern over the Beaufort Sea has broken down.

So while the sea ice extent is at a record low for the date, it is still early in the melt season, said the NSIDC, noting that changing weather patterns throughout the summer will affect what happens to sea ice during the rest of the summer.