“The Arctic is a variable place” 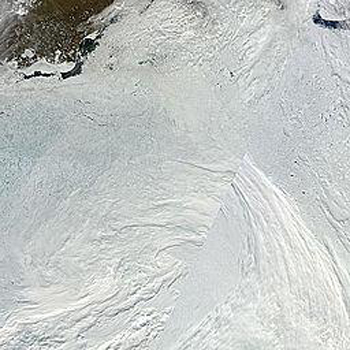 Even in a warming world, researchers should expect unusual periods of no change in the Arctic — and rapid change — according to a new paper. (NASA IMAGE)

Arctic sea ice disappeared at an alarming rate between 2001 and 2007, and then stayed relatively stable until 2013.

But that doesn’t mean global warming has stopped, according to new research led by Environment Canada and the University of Colorado in Boulder.

A new paper published in the journal Nature Climate Change says that Arctic sea ice will continue to decline at an uneven rate — and while that can include unusual periods of no change, it’s something we should get used to.

“Human-caused global warming is melting Arctic sea ice over the long term, but the Arctic is a variable place,” said Jennifer Kay, who co-authored the paper.

Natural “ups and downs” in temperature, wind and other environmental factors mean that even as sea ice slowly melts, weather can mask the long-term trend, Kay explained.

Even in a warming world, the paper contends, there’s still a one in three chance that any seven-year period would see no sea ice loss — much like researchers noted in the period between 2007 and 2013.

But neither time period should be used to forecast the long-term, Kay said.

But researchers determined that a seven-year period is too short to accurately capture long-term sea ice trends in the region.

“To understand how climate change is affecting the Arctic, you cannot cherry pick short stretches of time,” Kay said. “Seven years is too short.”

“Human caused climate warming has driven a decline in Arctic September sea ice extent over the past few decades,” the new paper noted, and “this decline will continue into the future.”

Researchers say that understanding how and why natural variability affects sea ice trends should help scientists better predict how sea ice will evolve in upcoming years and decades, which in turn will impact natural ecosystems, shipping routes and energy development.