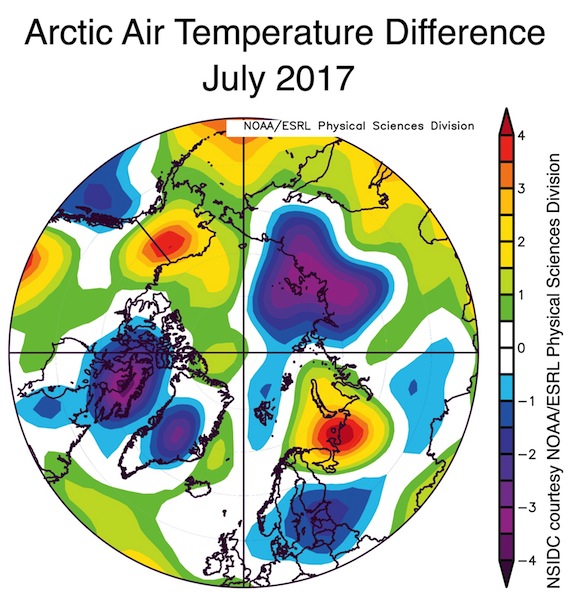 Arctic sea ice held its own in July, reflecting weather conditions that were not conducive to ice loss.

The NSIDC found the average Arctic sea ice extent for July—8.21 million square kilometres—ended up being the fifth lowest for that month recorded in the 38-year satellite record between 1979 to 2017.

Predictions indicate that the Arctic sea ice cover this year, expected to reach its lowest extent in September, may come in at roughly the sixth lowest in the satellite record.

In 2016, Arctic summer sea ice shrunk to its second-lowest extent.

The air temperature pattern over the Arctic was “rather complex” this past July, the NSDIC said Aug. 3.

Temperatures were above average over Alaska, but 2 C to 4 C lower than average over Greenland and East Central Siberia, while low pressure zones centred around the North Pole over Canada’s southern High Arctic islands.

Ice loss rates tend to be higher when the central Arctic Ocean is dominated by high pressure during summer, the NSIDC said.

While 2017 may not come in as a year of record ice loss, scientists remain concerned that Arctic sea ice retreat may be changing what’s called the Atlantic Meridional Overturning Circulation.

This ocean current is part of a huge global ocean conveyor belt of heat and salinity, that, among other things, keeps Europe warmer than areas at the same latitude in North America.