“Participants … are reluctant to look beyond familiar and reliable generating technologies” 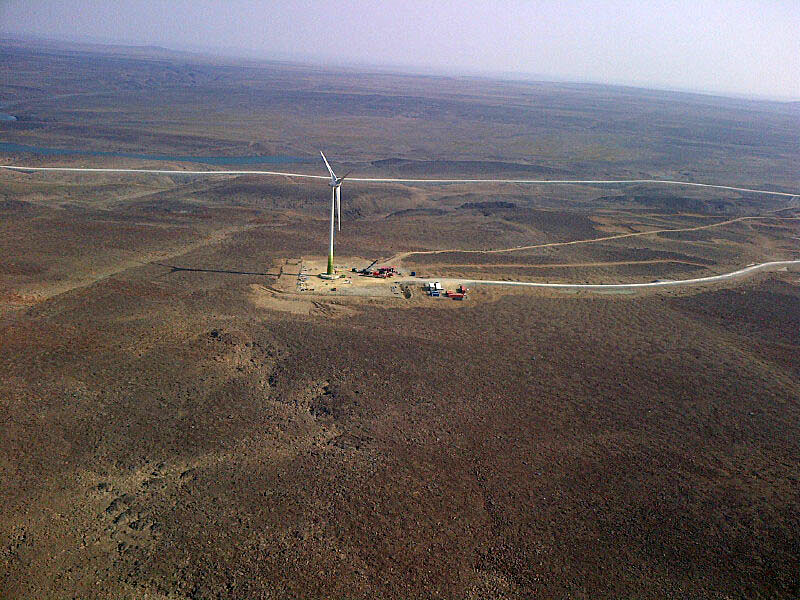 This 80-metre wind turbine near Glencore’s Raglan nickel mine in Nunavik is a rare example of alternative energy use north of the treeline. The three megawatt wind project supplies about five per cent of the Raglan mine’s energy needs. The Quebec-California cap-and-trade market for GHG emissions provided an incentive for the project, which could be expanded to nine megawatts if it proves to be successful. (FILE PHOTO)

Burn, burn burn: despite years of talk, it’s likely that long into the future, Canadian Arctic peoples living north of the treeline will continue to burn expensive fossil fuels to heat and power their homes.

That emerges from a big technical study released last month by a team of five researchers from Carleton University’s School of Public Policy and Administration.

The study, packed with technical data on operating costs, prices and subsidy models, looks at the similarities and differences between Nunatsiavut, Nunavik, Nunavut, the Northwest Territories and Yukon, through case studies and other forms of analysis.

Though its cautious, jargon-laden recommendations don’t explicitly say so, it’s clear from their report that the potential for use of alternative energy sources is much greater in the mostly sub-Arctic territories of Yukon and the NWT than in Arctic regions north of the treeline, like Nunavut and Nunavik.

They conclude, for example, that there is virtually no potential for burning biomass — such as waste wood chips — to generate electricity north of the treeline and that small markets, expensive transportation systems, a harsh climate and short construction seasons make alternative energy projects difficult to do in the Arctic.

And they point out that the Government of Nunavut has done little to meet the renewable energy goals set out in Ikummatiit, the GN’s 2007 energy strategy, and that in Nunavut, there’s little interest in alternative energy anyway.

“Participants in focus group discussions noted that the GN and QEC [Qulliq Energy Corp.] are reluctant to look beyond familiar and reliable generating technologies,” their report said.

That’s because the QEC believes its primary mandate is “keeping the lights on,” the report said.

And the QEC still believes that burning diesel, despite its financial and environmental costs, is the best way to fulfill its primary mandate, the report found.

Another reason is that nearly all attempts to try out wind or hydroelectric power in Nunavut have fizzled.

For example, a proposed hydro-electric dam near Iqaluit at Jayne’s Inlet has been postponed indefinitely and at the same time, the QEC’s capital plans focus heavily on refurbishing and expanding its fleet of diesel generators.

These “negative experiences” have likely “darkened the public’s perception of these types of projects in general,” the report said.

At the same time, the GN faces numerous pressures that take priority over alternative energy.

“Spending on energy technologies [in Nunavut] must compete with other acutely important policy areas such as housing, health and education,” the report said.

Elsewhere in the report, the Carleton researchers suggest that hydroelectric power in the North is most feasible when hydro projects are located close to mines, which are big consumers of electrical power.

But the mining industry does not generally show much interest in such co-operation.

“Large Arctic mines, however, have shown little interest in investing in, or being a partner with a hydro development project despite their high power load,” the report said.

The only case study for Nunavut cited in the report is a little-known project in Iqaluit aimed at increasing energy conservation in government buildings.

Right now, that project saves the GN about $1.7 million a year in energy costs. In 2015 and 2016, the GN plans to extend it to the Kivalliq region.

However, all this means that for the foreseeable future, Nunavut will likely continue to consume more than 40 million litres of diesel a year, requiring consumers to pay some of the highest power rates in North America.

In Nunavik, however, the study’s authors cite the small-scale Innavik hydroelectric project in on the Inukjuak River as a potential success.

Owned 100 per cent by Inukjuak’s Pituvik Landholding Corp. — a local body set up under the James Bay land claims agreement — the project would generate 7.5 megawatts for power, enough to provide electricity to all of Inukjuak, which has a population of about 1,600 people. It would also allow buildings in the community to switch to electric heat.

But Hydro-Québec offered to buy power from the station at a rate that covers only about 40 per cent of its operating costs.

And the entire arrangement is plagued by an overall lack of transparency.

“All of the details of the calculations, however, were not disclosed thus raising doubt amongst developers and the community as to whether Hydro-Québec had undervalued the avoided cost of diesel generation,” the report said.

Also in Nunavik, there’s a private sector project — inspired by the Quebec-California cap-and-trade system for reducing greenhouse gas emissions — that a mining company is using to replace some of the 60 million litres of diesel it burns every year.

The Raglan mine wind project near Deception Bay involves the erection of a big, 80-metre wind turbine capable of producing three megawatts of power.

That’s enough to replace 2.3 million litres of diesel fuel each year and to supply about five per cent of the Raglan mine’s power needs, which range from 14 MW in the summer to 19 MW in the winter.

“The mine uses approximately 60 million litres of diesel fuel per year, leading to significant cost advantages if this diesel use is partially displaced by clean energy,” the report said.

“The large potential reduction in GHG emissions was another driver behind the project, with a lower carbon footprint aiding the company’s efforts in environmental stewardship.”

Glencore, the company that owns the Raglan mine, is also looking at the possibility of building more turbines in the future to increase their power generating capacity to nine MW.

Report on the State of Alternative Energy in the Arctic