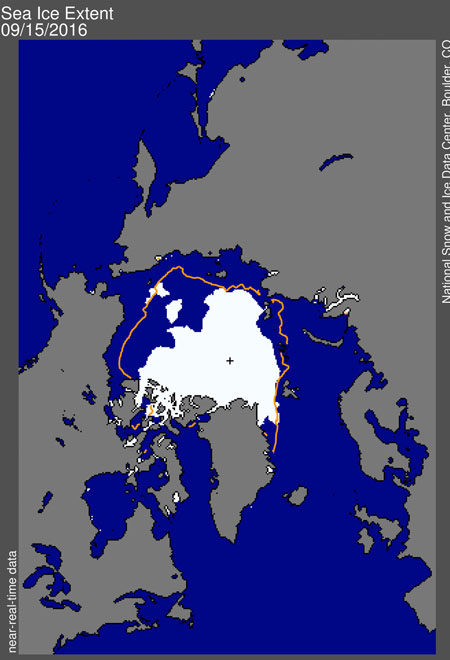 Arctic summer sea ice shrunk to its second-lowest extent since satellite records began in 1979, driven by a warm month of March and by heavy sea ice loss in an area stretching from the eastern Beaufort Sea to the Chukchi Sea, the National Snow and Ice Data Centre in Boulder, Colorado reported Sept. 15.

“Satellite data show extensive areas of open water in the Beaufort and Chukchi seas, and in the Laptev and East Siberian seas,” the NSIDC said in a release.

That creates a statistical tie with the year 2007, when Arctic sea ice coverage melted down to 4.15 million sq. km.

The average amount of sea ice coverage from 1979 to 2000 was 6.7 million sq. km., but annual averages fell dramatically after that period.

This year’s high rate of summer ice melt is likely linked to warm weather this past March, when air temperatures over the Arctic were two to six degrees Celsius warmer than average in nearly every Arctic region.

That’s likely why sea ice extent is so low this September, in spite of generally cool and cloudy weather across the Arctic.

“As noted in our mid-August post, the upper ocean was quite warm this summer and ocean-driven melting is important during late summer,” the NSIDC said.

Some areas, however, have been much warmer than normal this month.

In the Laptev and East Siberian seas where there are extensive stretches of open water, air temperatures soared 9 C above average this September.

The more southerly routes through the Northwest Passage are also ice free right now, said the NSIDC said, which promised a more detailed analysis this October.