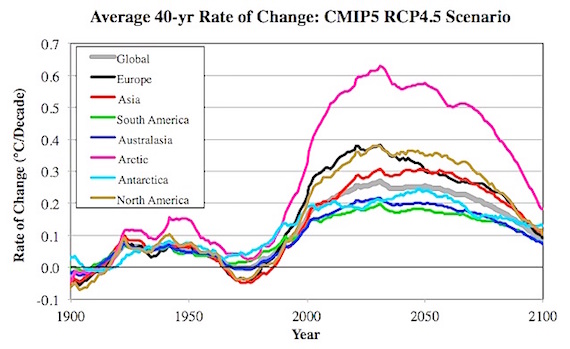 See that purple line? That’s the 40-year rate of temperature change in the Arctic, which is much higher than elsewhere in the world, according to best-case scenario model used by scientists in their new research. This sees carbon dioxide concentrations in the atmosphere stabilizing at about 525 parts per million. These concentrations are now at about 400 ppm. (GRAPH COURTESY OF NATURE)

Starting in 2020, temperatures in the Arctic are set to heat up dramatically, says a new study.

That’s when human-caused warming will move the world “into a regime in terms of multi-decadal rates of change that are unprecedented for at least the past 1,000 years,” says the paper “Near-term Acceleration in the Rate of Temperature Change,” published March 9 in the journal Nature.

For the paper, scientists from the Pacific Northwest National Laboratory looked at various climate models and determined that by 2020 ”the four-decade warming trend hits 0.45F (0.25C) per decade.”

Right now, the authors say the climate system of the Earth is transitioning to a new system of increased warming. And the impact of climate-warming greenhouse gas emissions will become greater.

The results, they say, could mean unprecedented rates of change which could then intensify environmental impacts in the coming decades.

If measures to curb global greenhouse gas emissions aren’t stepped up immediately, the rate of warming after 2050 would be too rapid for most people or animals to adapt, they say.

So, research on these impacts, and also on potential adaptation measures, is “urgently needed to guide adaptation.”

Adaptation to these changes will moreover continue to be necessary “for some decades,” the study’s authors say, even if efforts are made to curb greenhouse gas emissions and other climate-warming substances.